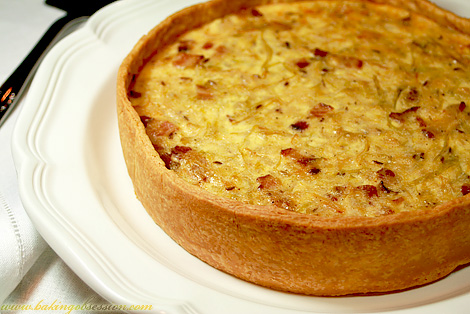 This quiche is equally good warm or at room temperature. You can refrigerate the leftovers and reheat them for lunch next day. I even like to steal a slice from the fridge and eat it cold.

For the pastry dough:

The ingredients listed below make two 9-inch pie shells, or enough for a double-crust pie. You will need only half of the dough for this recipe. Scale the recipe down if you want but it’s worth to make a double batch. You can freeze another half, tightly wrapped, for later use. It can be kept in a freezer for up to a month. I like to roll this extra dough and fit it into the tart or pie pan, and freeze the dough already in a pan. It’s not even necessary to defrost the shell before prebaking.

Pulse in a food processor the flour, butter, shortening, and salt just until the mixture resembles a coarse meal with some small (pea-size) butter lumps.
Drizzle 5 tbsp ice water evenly over the mixture. Pulse until incorporated. Squeeze a small handful of the dough: if it doesn’t hold together, add more ice water, ½ tbsp at a time, pulsing until combined. Do not overwork the dough, or the crust will be tough.
Turn the dough out onto a work surface. Divide the dough into 8 portions. With a heel of your hand, smear each portion once or twice in a forward motion to help distribute the fat. Gather the all dough together then divide it in half. Flatten each half into a disk. Wrap each disk in plastic wrap and chill until firm, at least 1 hour. The dough can be chilled up to 2 days.
Reserve one half of the dough for another use (if you made the double batch).

Roll out another portion of the dough to ¼-inch thickness, fit it into a 9-inch springform pan, lightly buttered. Freeze for about 30 minutes. Meanwhile preheat the oven to 400 F. Line the shell with buttered aluminum foil, a shine side down. Fill the foil with pie weights or dry beans. Bake for 25 minutes. Carefully remove the foil and the pie weights. Return the crust to the oven for additional 10 minutes, until light golden. Cool the crust on a rack while preparing the filling.

Make the filling, bake the quiche:

Reduce the oven temperature to 375 F. Cook the bacon in heavy large skillet over medium heat for 5 minutes. Pour out all but 2 tbsp of fat. Add the onion and sauté until tender, about 5 minutes more. Add the cabbage and cook until all liquid evaporates and the cabbage is golden brown, stirring frequently, about 16 minutes.

Combine the half and half, eggs, cheese, salt and caraway; season generously with pepper. Stir in the cabbage mixture, Pour into the crust. Bake until the filling puffs and starts to brown, about 40 minutes. Serve warm or at room temperature. Beet salad with simple French vinaigrette is a great accompaniment (I will post the recipe for the salad later). 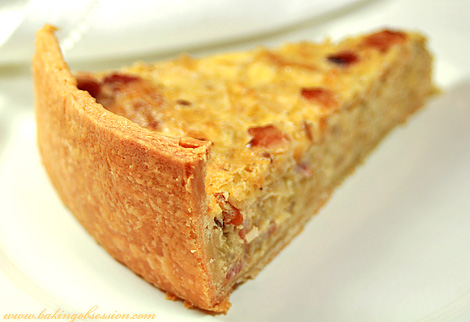