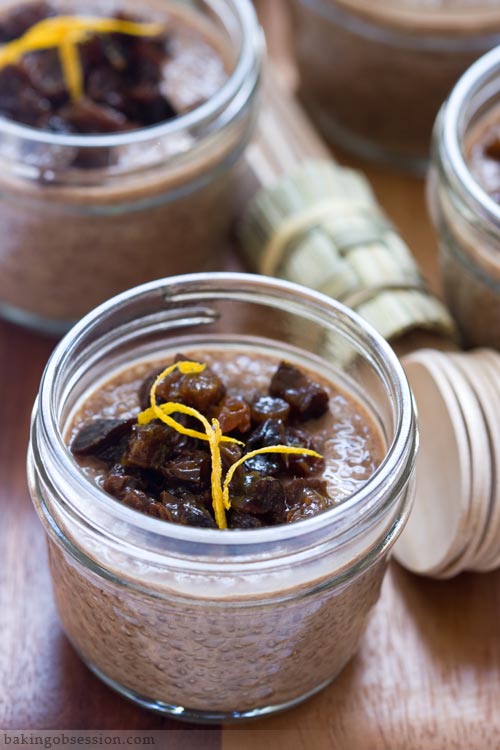 It always helps me to tame the chocolate cravings without consuming any processed sugar. Surprisingly, even a small serving is quite satisfying. The pudding takes no time to make, it just needs a couple of hours in the refrigerator to chill and firm up. I like to divide the pudding between small Mason jars with screwed-on lids which gives me an opportunity to pack it for lunch and take it with me.

For the dry fruit topping:

In a medium bowl, combine the chia seeds, cocoa powder, cinnamon, and cardamom. Add the coconut nectar (or other sweetener you choose) and vanilla extract. Stir in the milk. Let the mixture stand for 5 minutes, then whisk it to break the chia lumps. Divide between the jars or small bowls, and refrigerate for at least 2 hours before serving.

While the pudding is chilling, make the dry fruit topping. In a small bowl, combine the chopped prunes, raisins, orange zest, juice, and cinnamon, if using. Stir to combine. Cover the bowl with plastic wrap and let it stand, stirring occasionally, until the fruits are softened.

Once the pudding is chilled and firmed up, divide the prune-raisin topping between the pudding servings. The pudding can be served now or covered and refrigerated further, up to several days (dare I say it even gets better in a day or two).