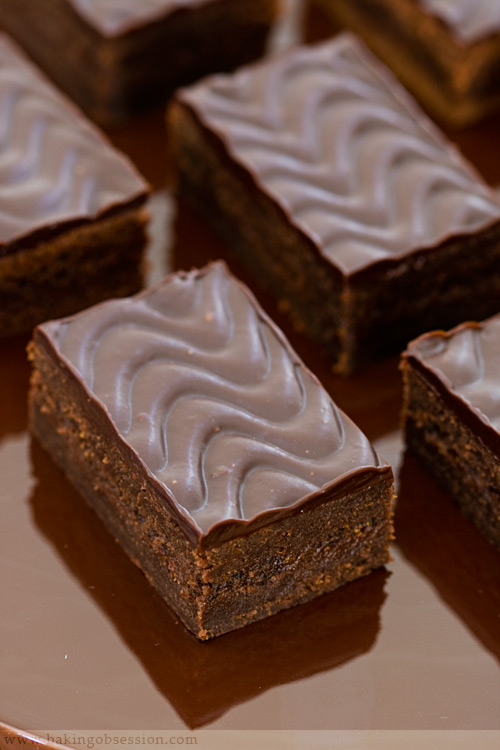 I’m craving the sun, heat, sandy beaches, and another Mexican vacation. Sadly, this vacation, although very much needed during the grey rainy Vancouver’s winter, will remain only a dream at least until next year… These super-fudgy brownies do have some healing, soothing power; could be an alternative to Prozac… Please, someone, take them away from me, must… stop… eating!

Makes a 9-inch square brownie slab, serves about 8 to 12 (depends on how you slice it)

For the ancho and fig puree:

After the ganache is smooth, gradually stir in 2 tsp of dark rum.

Place the chile on a small baking sheet and put it in the preheated oven for a minute or two, until it’s softened. Don’t let it stay in for too long, or it will become crisp and unusable. Remove the chile from the oven and remove the stem and seeds.

Place the chile, figs, brown sugar, salt, and 1 tbsp of the vanilla in a medium saucepan and add the water. Bring the mixture to a simmer over medium heat, and cook until the figs are very soft, and water is mostly absorbed/evaporated, about 15 minutes. Puree the mixture in the food processor or blender until smooth. You should get about ¾ cup to 1 cup of the puree. Transfer to a small bowl and set aside. Can be made in advance and stored, covered, in the fridge until needed.

Center an oven rack and preheat the oven to 350 F. Line two 9×9-inch pans (or 8×8-inch) with parchment paper, lightly butter the paper.

In a small bowl, whisk together the flour, cinnamon, cayenne pepper, and salt. Set aside.

Bring 1 inch of water to a simmer in a wide skillet. Turn the burner off (if your stove is electric, remove the skillet from the burner). Combine the butter and chocolate in a heatproof bowl and set the bowl in the hot water. Stir constantly until melted and smooth.

In a large bowl, whisk the eggs and vanilla together, then whisk in both sugars. Stir in the chocolate and butter mixture, then fold in the flour mixture.

Divide the batter equally between the prepared pans and spread to level. Bake for about 20 minutes, until the top forms a shiny crust and the batter is moderately firm. Cool until warm in the pans on a rack. Using an offset spatula (makes it really easy) or a paring knife, scrape off most of thin shiny crust from the top of both brownie slabs. Don’t worry how it looks. Spread the ancho-fig puree over the top of one brownie slab. Carefully unmold the second slab, remove the parchment paper and invert it, top side (now quite ugly) down over the fig puree-covered first brownie slab. Press gently to adhere. Cool completely on the rack before glazing with the ganache.

Once the brownies are cool, pour or spread the cinnamon ganache over the top. Refrigerate until firm. Using a sharp knife, dipped in hot water and wiped dry, cut off the edges (enjoy them right away) and slice neatly into the bars. Store in an air-tight container in the fridge, but bring to room temperature before serving.