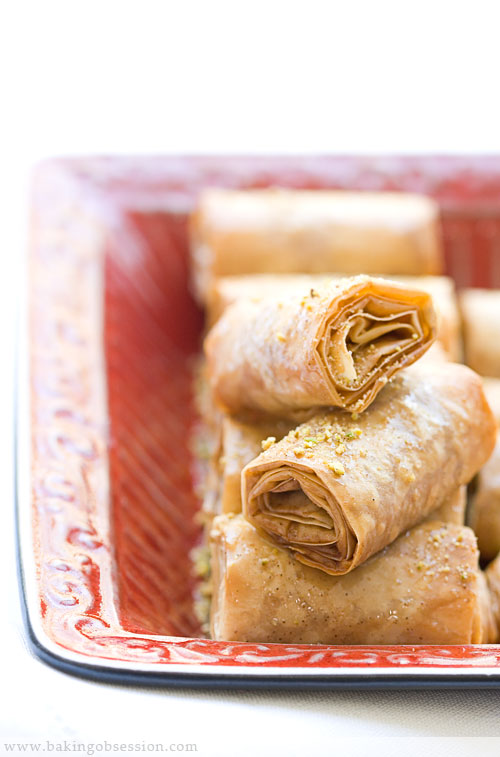 Maybe not as fabulous as the real thing, not as overloaded with nuts and oversaturated with aromatic syrup, still, these are pretty good for what they are – little sweet treats made of some phyllo leftovers (there’s always something left unless the baklava itself was made). The fingers also keep better, stay crisp longer. 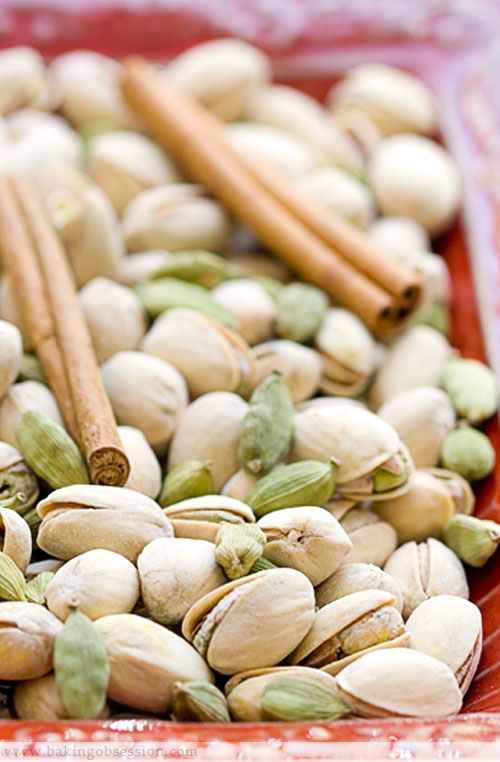 Center an oven rack and preheat the oven to 350F. Cover a large baking sheet with parchment paper or silicone mat. Set aside.

In a bowl of the food processor, combine the pistachios and sugar. Process until finely ground. Stir in the ground cardamom and cinnamon.

Using a pizza wheel, cut the phyllo sheet into 4 equal rectangles making two perpendicular cuts through the middle. Work with one small rectangle at a time; place it with one long side parallel to the edge of the working surface. Cover the remaining 3 rectangles with plastic wrap. Visually, divide the rectangle into thirds lengthwise. Brush the middle third with a little bit of melted butter and sprinkle with about 1 tbsp of nut mixture. Fold the upper third over the filling, then brush this folded part with a bit of butter and sprinkle again with another tablespoon of nut mixture. Fold the lower third over the filling again and lightly brush with butter. Gently roll the strip, buttered side up, over a handle of a wooden spoon. Delicately slide the cylinder off the spoon and place it onto the prepared baking sheet. Repeat with the remaining phyllo. You will get 4 baklava fingers from each phyllo sheet, 32 in total.

Bake for 20 to 22 minutes until golden brown. Cool on the baking sheet on a cooling rack.

Meanwhile, make syrup. In a small heavy saucepan, combine the water, sugar, honey, cinnamon sticks, cardamom pods, and lemon peel. Bring to a boil over medium heat and simmer, stirring with a wooden spoon, until the sugar is dissolved. Take off the heat and stir in the brandy. Transfer the baked and cooled fingers into a rimmed baking pan (like glass Pyrex) just large enough to fit them all. I like to stand the fingers upright first to allow the syrup to penetrate better, and then drop them on their side. Pour the hot syrup over the fingers leaving the peel and spices behind. Give the fingers a turn in the syrup to saturate, wait for several hours before serving. If you have any nut mixture left, sprinkle it over the fingers before serving. They can be kept in air-tight container for about a week.