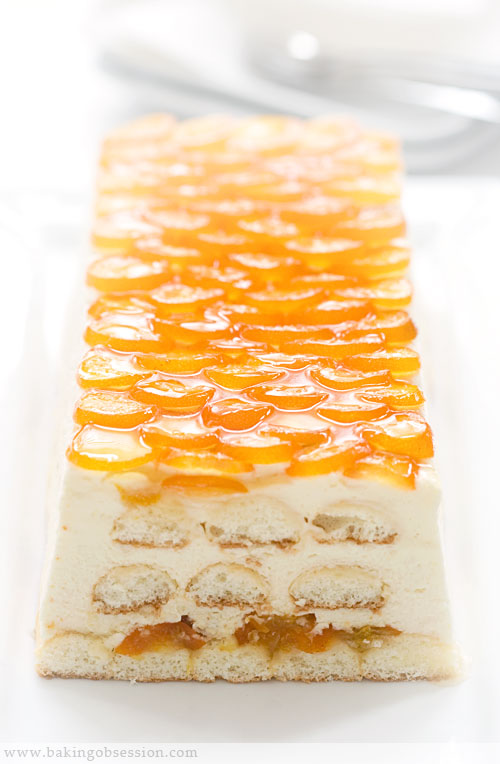 This month’s Daring Bakers’ challenge was Italian tiramisu. Deeba from Passionate About Baking and Aparna from My Diverse Kitchen, the hosts of the challenge, chose Carminantonio’s tiramisu recipe from the “The Washington Post”, July 11, 2007. The whole thing was supposed to be made completely from scratch, including the savoiardi/ladyfingers biscuits (the chosen recipe is from the “Le Cordon Bleu at Home”) and mascarpone cheese (thank you for choosing my recipe here).

Frankly, it was quite a surprise for me to read through the tiramisu ingredients list. The recipe is somewhat unusual. It calls for only 75g of mascarpone (it’s a rarity a tiramisu recipe requires less than a pound of cheese) and some pastry cream (my first thought was a cheaper substitute). The recipe creator, probably, was using what he had on hand (there’s always some crème patisserie stash in a commercial fridge). I’ve encountered many different recipes of the Italian classic and mostly everywhere Zabaglione is a must, folded whipped egg whites are quite common, pastry cream…? Really unusual…

I changed a few things here and there (couldn’t help myself, sorry). I tripled the cheese amount (I still made the required pastry cream, don’t disqualify me, please) and reduced the sugar. I used a different technique for mixing the savoiardi batter (I’m a strong believer in the power of well-whipped egg yolks) and higher temperature for baking: it is really a full-proof method that never fails me. I also added a touch of gelatin to the cream filling mixture, just a tiny bit to stabilize the whole thing, so the dessert could be presented free-standing and sliced neatly without freezing in advance. And since there was no need to chill the zabaglione and pastry cream, the addition of gelatin also allowed me to speed up the assembly (as usual, I procrastinated until the 27th and had to rush). I actually was able to unmold and slice it just after 3 hours of refrigerating (although, no doubt, the flavor does improve after overnight chilling).

As for the flavor I stepped out of the tradition (we were allowed to). I used the kumquats – wonderful citrus fruits with a very short season. I flavored the pastry cream and zabaglione with the kumquat zest, and used Grand Marnier instead of Marsala. I dipped the ladyfingers into a mixture of orange juice, Grand Marnier and candied kumquat syrup. The candied kumquats themselves became a topping and a layer at the bottom. Extra syrup was passed around to dribble over the plated slices.

Deeba, Aparna, thank you for hosting! It’s a great idea to master the ladyfingers; they are so versatile! 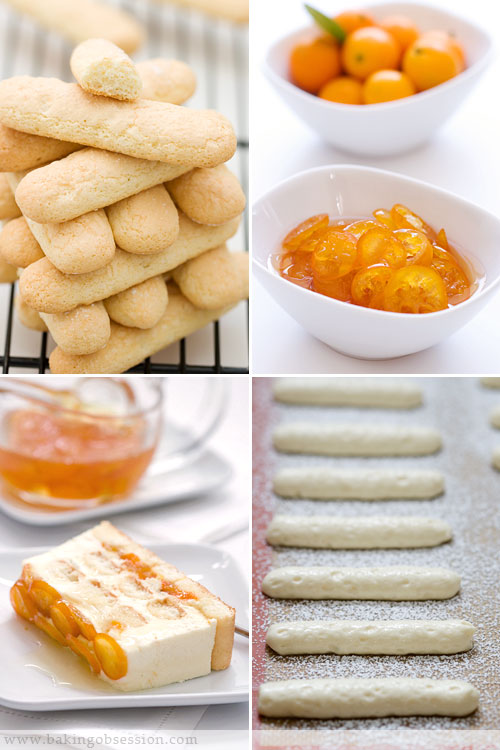 For the candied kumquats (makes more than you will need for the tiramisu assembing):

For the savoiardi biscuits (makes about 36; you might not need all):

For the soaking liquid:

For the kumquat pastry cream:

For the whipped cream:

For assembling the tiramisu:

In a large saucepan, combine the sugar and water. Bring to a boil over medium-high heat, stirring to dissolve the sugar. Add the sliced kumquats, reduce the heat, and simmer the fruits, stirring occasionally, until translucent, about 30 minutes. With a slotted spoon, transfer the candied slices into a lidded bowl. Return the syrup to the high heat and boil until reduced to about 1 ¼ cups. Pour the reduced syrup over the candied kumquats. Cool. Cover and keep refrigerated until needed. Can be kept over a week in the refrigerator.

In the bowl of a stand mixer, combine the egg yolks, 2 tbsp of sugar, and vanilla extract. Whip with the wire attachment until pale in color and thick (for about good 4 minutes). Set aside. If you don’t have the second stand mixer bowl, transfer the whipped yolks into a large bowl and thoroughly wash the first one.

In another clean grease-free bowl, using another whisk attachment (or thoroughly wash the whisk used for whipping the yolks) beat the egg whites until soft peaks form. Gradually, add the remaining granulate sugar, and continue beating until the egg whites form firm peaks, glossy and smooth.

With a rubber spatula, gently fold about 1/3rd of the whipped whites into the yolks to lighten them up. Spoon about a half of the remaining whites over the yolk mixture, then sift a half of the flour over the whites. Gently fold until the ingredients are barely combined. Spoon the rest of the whites over the yolk mixture, sift the rest of the flour over the whites, and then fold delicately until combined. It is important to fold very gently and not overdo the folding. Otherwise the batter would deflate and lose volume resulting in the ladyfingers which are flat and not spongy.

Fit a pastry bag with a plain tip about ½-inch wide and fill with the batter. Pipe the batter into 4-inch long strips leaving about 1 inch space in between.

Sprinkle half the confectioner’s sugar over the ladyfingers and wait for 5 minutes. The sugar will pearl or look wet and glisten. Now sprinkle the remaining sugar. This helps to give the ladyfingers their characteristic crispness.

Bake the ladyfingers, in batches (slide the first sheet into the oven as soon as you’ve piped), for 7 to 8 minutes, until they puff up, turn lightly golden brown and are still soft.

Cool completely on the sheets on a cooling rack, and then remove the ladyfingers from the baking sheet with a metal spatula (or pry off the parchment, if using).

Store them in an airtight container till required. They should keep for 2 to 3 weeks.

Lightly spray a large loaf pan with oil and line with plastic wrap. Line the bottom with the slightly overlapping candied kumquat slices. Set aside.

In a bowl, stir to combine the juice, kumquat syrup, and Grand Marnier. Set aside.

Place all ingredients in a small heatproof bowl and whisk to combine. Set the bowl in a wide skillet of barely simmering water and whisk constantly until it resembles thick custard and the instant-read thermometer reads 160F.
Transfer the zabaglione to a small clean bowl to stop further cooking. Set aside while you are working on the pastry cream.

In a small saucepan, bring the milk to the boil over the medium heat.
In the meantime, combine the sugar, flour, and salt in a small bowl and whisk together. Whisk in the zest and egg yolk.

Once the milk has reached the boil, temper the yolks by whisking a couple spoonfuls of the hot milk into the yolk mixture. Continue whisking and slowly pour the rest of the milk into the tempered yolk mixture.
Pour the yolk-milk mixture back into the saucepan and place the pan over the medium-low heat. Whisk vigorously and continuously until the mixture returns to a boil. Keep whisking vigorously until the pastry cream is thickened, about 3 minutes more. Strain the pastry cream into the small bowl with the prepared zabaglione, add the vanilla extract and orange oil; whisk to combine. This mixture should be slightly warm (about 98F) by the time of incorporating the gelatin. Place the bowl into the skillet with hot water for a minute or two, stirring, if needed.

Meanwhile, measure 2 tbsp of lemon juice into a small bowl or cup. Sprinkle the gelatin over the juice and let it soften for a couple of minutes. Microwave for 10 seconds on “High” to dissolve the gelatin. Whisk a little bit of zabaglione-pastry cream mixture into the gelatin, and then whisk it back into the rest of zabaglione mixture.

In a chilled bowl, combine the cream, sugar, and vanilla extract. Whip until medium peaks form. Set aside.

In a large bowl, with the same beaters (no need to wash) beat the mascarpone until smooth (don’t overdo). Gradually mix in the zabaglione-gelatin mixture. Before folding the whipped cream, make sure the mixture is no longer warm, it should be about 85F. Fold in about 1/3rd of whipped cream into the mascarpone mixture, and then fold in the rest. Transfer the filling into a large pastry bag fitted with ½-inch plain round tip. Pipe an even layer over the kumquat layer in the loaf pan.

Workings quickly, dip both sides of ladyfingers (work with one at a time), in the orange juice mixture. They should be moist but not soggy. Immediately transfer each ladyfinger into the loaf pan, placing them side by side in a single layer. You may break a lady finger into two, if necessary, to fit. Pipe another layer of mascarpone cream. Top with another layer of soaked ladyfingers. Pipe the last layer of cream. Arrange some kumquat slices over the cream layer, and then top them with the last layer of ladyfingers.

Cover with plastic wrap and refrigerate the tiramisu for at least 4 hours, better – overnight.

To serve, carefully invert the loaf pan onto a serving platter, remove the plastic and drizzle some candied kumquat syrup over the top (if you wish).