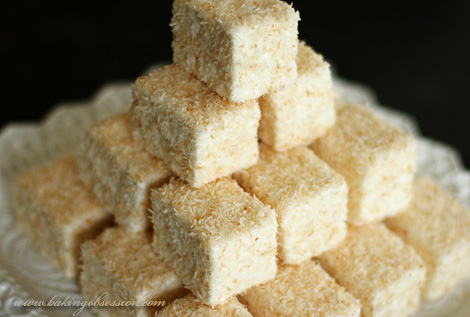 I like marshmallows. But I don’t eat the store bought variety. Once, being incautiously curious, I read the list of ingredients on a marshmallow package… I’ve been making them ever since. And they are not difficult to make. If you happen to have a stand mixer (not the totally necessary equipment for this task, may I say) the whole process is a breeze.

I prefer to coat the marshmallows with toasted unsweetened coconut instead of the most common cornstarch, or a combination of the last and icing sugar. The cornstarch aftertaste is not the one I’m particularly fond of. The coconut also cuts down the cloying sweetness of the marshmallows.

This recipe is my adaptation of Dorie Greenspan’s.

Line a 9×13-inches cake pan (make sure the sides are at least 1-inch high, don’t use a jelly roll pan) with parchment paper. Coat the bottom generously with the coconut. Set aside.

Put 2/3 cup of the water, the sugar and the corn syrup in a medium saucepan over medium heat. Bring the mixture to a boil, stirring until the sugar dissolves. Once the sugar is dissolved, continue to cook the syrup-without stirring-until it reaches 265 F on the candy thermometer, about 10 minutes.

While the syrup is cooking, work on the gelatin and egg whites. In a microwave-safe bowl, sprinkle the gelatin over the remaining water (a scant 1/2 cup) and let sit for about 5 minutes, until it is spongy, then heat the gelatin in a microwave oven for 20 to 30 seconds to liquefy it.

As soon as the syrup reaches 265 F, remove the pan from the heat and, with the mixer on medium speed, add the syrup, pouring it between the spinning beaters and the sides of the bowl. Add the gelatin and continue to beat for another 3 minutes, so that the syrup and the gelatin are fully incorporated. Beat in the extracts.

Using a large rubber spatula, scrape the mixture into prepared pan. Then spread it into the corners and level the top. Generously dust the top with the coconut to cover it completely. Let the marshmallows set in a cool, dry place, at least for 3 hours and up to 12 hours.

Cut the marshmallows with a sharp thin knife into squares, rectangles or any other shapes you want. Rinse and dry the knife frequently as you do. Spread the rest of the coconut on a plate or a baking sheet. As each piece is cut, drop it into the coconut. When you’ve got 4 or 5 marshmallows on the plate, reach in with your fingers and turn them to coat; transfer them to a serving bowl, or into a container for storing. Repeat with the rest of the batch.

They will keep in a cool, dry place for about a week. Don’t cover them too closely. 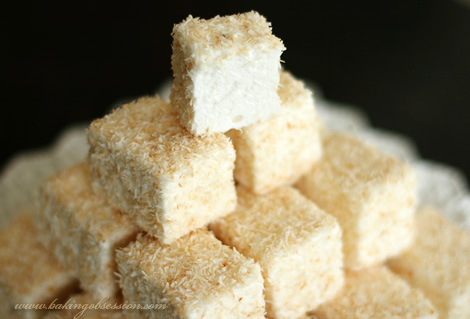