In Russia savory yeasted pies are very common. But I wanted to step off the traditional preparation method and try something new. So I tweaked the dough a little and it doesn’t require a long proofing time now. The crust is soft but at the same time it’s tight and crumbly. The filling is, on the other hand, more of a North American invention. But I’m pretty sure my grandmother would approve.

In a small bowl or glass measuring cup dissolve the pinch of sugar in 3 tbsp water. Add the yeast, cover with plastic wrap and let stand until foamy, about 10-15 minutes.

Meanwhile, combine the dry ingredients in a bowl of a stand mixer. Fit in a paddle attachment. Add the cold butter and process on “low” until mealy.

In a large measuring cup with a spout whisk the cold milk, eggs, sour cream, and lemon juice. Whisk in the yeast. Add this mixture in a stream to the flour-butter mixture with the mixer still on “low”. Mix until well combined, about 2 minutes. Replace the paddle attachment with a dough hook and knead the dough for 5 minutes. Turn the dough onto a lightly floured working surface and fold it over several times to form a soft dough. Cover the dough with plastic and refrigerate for 15 minutes.

Assemble and bake the pie:

Divide the dough into two pieces, so one is a bit larger than another. Roll the bigger one on the floured surface until it’s about ¼-inch thick. Transfer the rolled dough onto a lightly greased or lined with parchment baking sheet. Mound the filling on top of the dough leaving about 1-inch border all way around. Brush the border with a little of the egg wash. Roll the second piece of the dough to the same thickness. Here you can get creative and cut the dough into ½-inch stripes using a pizza wheel, or you can leave the dough as is. Transfer the dough on the top of the filling. If you are making the lattice, interweave the stripes. Pinch the edges to seal.
Loosely cover the pie with plastic wrap and put the pie into a warm, draft-free place until it’s light and puffed, about 30-40 minutes.
Preheat the oven to 350F.
Brush the top of the pie with the egg wash. Cut several slits in the top of the pie if you covered the filling with a whole piece of the dough, not the lattice.
Bake the pie until light golden, about 30 to 35 minutes. Take the pie out from the oven. Carefully transfer to a cooling rack. Brush the top crust with some melted butter. Cover with parchment paper and then drape loosely with a clean kitchen towel. It will soften the crust slightly.
The pie is the best when served warm or at least the same day it’s baked. But you can reheat the leftovers in the oven the following day. 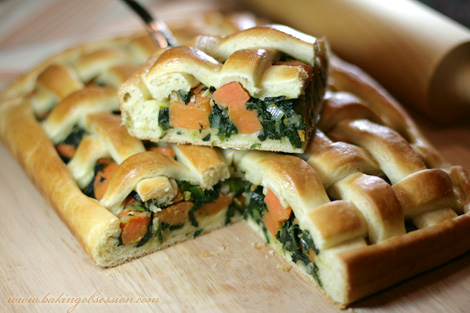