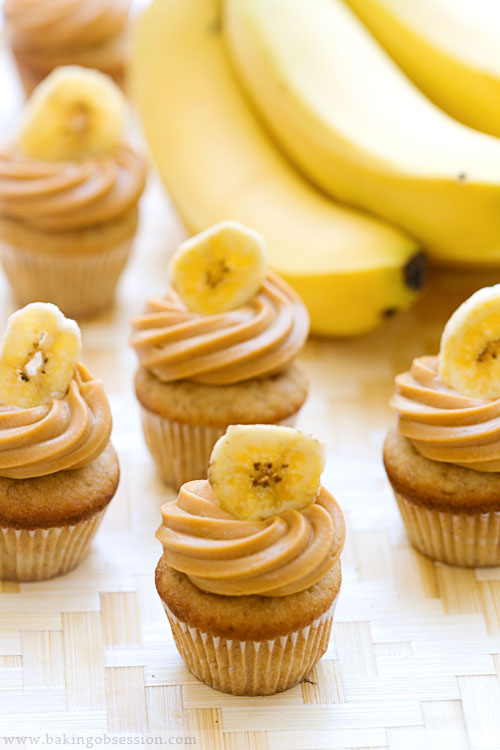 This is my basic and the most often used banana-bread formula. I do vary flavors, play with different flours, but I usually keep the proportions of the main ingredients the same. The bread is moist but not wet or sticky, just as good as any banana bread should be. I bake this batter as a loaf, cake layers or cupcakes, according to my mood or need.

For the banana-caramel filling: use this recipe; you will need way less that the recipe makes, so just refrigerate the leftovers and use it as an ice cream topping later

For the caramel frosting:

Center an oven rack and preheat the oven to 350F. Fit parchment mini-cupcake liners into mini-cupcake molds. Spray the liners lightly with oil spray.
Sift the dry ingredients onto a sheet of parchment paper or into a bowl. In another bowl, combine the banana puree, sour cream, rum, and vanilla extract.

In a large bowl, beat the butter with an electric mixer for a few seconds, until creamy. Gradually add the sugars and beat until light and fluffy, 6 to 7 minutes. With the mixer on medium, add the eggs, one at a time, beating well after each. Reduce the speed to low and add the dry ingredients in three additions alternating with the banana mixture, starting and ending with the dry ingredients. Scrape the bowl as necessary, and beat only enough to incorporate the ingredients after each addition.

Transfer the cake batter into a large pastry bag fitted with a large plain tip and pipe the batter into the prepared molds filling them about ¾-full. This is the easiest way to equally divide the batter between so many mini-muffin molds. Although you can also use a spoon.

Bake the cupcakes for about 18 to 20 minutes, until puffed and a cake tester comes out clean. Cool the cupcakes for 5 minutes on a cooling rack, then unmold and cool completely on the rack before filling and frosting.

Stir together the sugar and water in a high-sided medium saucepan. Cook, stirring occasionally, until the sugar dissolves, then raise the heat to moderately high and boil without stirring, occasionally brushing down the sides of the pan with a wet pastry brush, until the syrup turns deep amber in color. Immediately remove the pan from the heat, stir in the butter, sour cream, rum, vanilla, and salt. Transfer to a bowl and let cool, stirring occasionally with a wooden spoon, until just slightly warm.

With the paddle attachment of a stand mixer or with the hand-held electric beaters, beat the cream cheese until lump-free and smooth. Gradually, in a thin stream, beat in the caramel. Mix until well combined, scraping the sides of the bowl as needed. The consistency should be somewhat of softly whipped cream. Cover with plastic wrap, pressing it directly over the surface. Refrigerate until firm enough to pipe, at least for a couple of hours, or better – overnight.

To fill the cupcakes, cut out a small, round, fennel-like hole with a sharp paring knife in the top of each cupcake. Enjoy the scraps right away. Transfer the banana caramel into a small sealable plastic bag, snip a corner, and pipe about a half-teaspoon of the caramel into each cavity. Don’t overfill the cupcakes, or the caramel will leak and cause the frosting to slide off.

To frost the cupcakes, transfer the frosting into a piping bag fitted with a large star tip and pipe a rosette over the top of each cupcake. Refrigerate to firm up the frosting. Remove the cupcakes from the fridge 30 minutes prior the serving time. The cupcakes can be made a day in advance and kept in the refrigerator in an air-tight container. Garnish with the banana chips close to the serving time, so the chips wouldn’t lose their crispness.