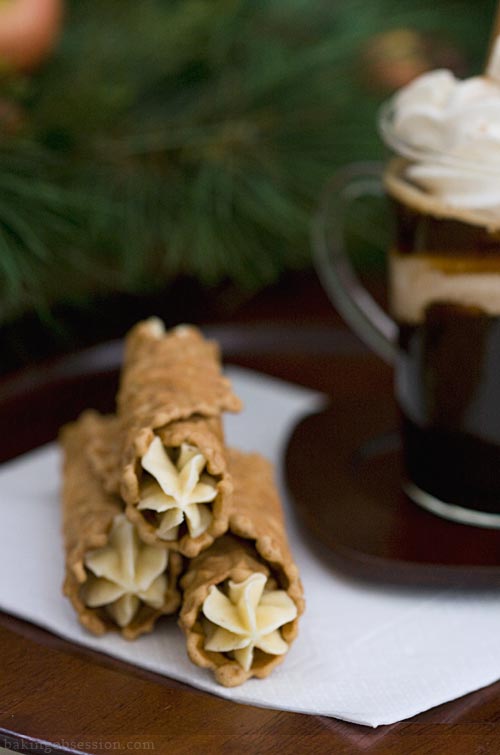 I hope everyone had truly wonderful Christmas. I wish you a prosperous and joyful 2012, and the most amazing New Year celebration!

There are dozens of possible filling choices for pizzelle. The buttercream has a major advantage – it doesn’t soften a crispy pizzelle shell even if they were filled a day in advance. There’s just one thing to remember when choosing buttercream as a filling: roll the pizzelle cookies tight, so the amount of buttercream inside wouldn’t be excessive and in a good proportion with the cookie itself.

Smooth and creamy crème anglaise-based buttercream is so naturally turned into eggnog-flavored one by addition of nutmeg and dark rum. It goes well with crispy spicy pizzelle shells.

Sift the dry ingredients over a bowl. Set aside.

In another bowl, whisk the eggs and sugar to combine, then whisk in the molasses and vanilla extract. Whisk in the melted butter. Using a rubber spatula, fold in the flour mixture. Set the batter aside while preheating a pizzelle iron. I use CucinaPro Non-Stick Pizzelle Baker.

After the iron has been heating for a few minutes, open the cover and spray the top and bottom of the imprints with oil. Close the iron to finish heating.

Drop a scant tbsp of the batter just a bit further of the center of each imprint, close the cover, and bake the pizzelle until the steam stops coming out from between the plates.
You can peek without ruining them – if they are too pale, close the iron and bake longer.

Roll the pizzelles tightly around a wooden spoon’s handle while they are hot and pliable. To do so without burning your fingers I strongly recommend wearing cotton beauty gloves (buy a pair for this purpose only). While rolling the first cookie, keep another one on the grid. It is also easier to use two spoons instead of just one; leave the rolled pizzelle on the spoon’s handle while rolling another cookie. It speeds up the process. Cool pizzelle completely on a cooling rack before filling.

Combine the milk, half of the sugar, and nutmeg in a heavy saucepan and bring to a simmer.

Right before the cream is ready, in a medium bowl whisk the egg yolks and remaining sugar together until smooth. Gradually, in a very thin stream, add the hot milk, whisking constantly. Pour this mixture back into the saucepan and return to the stove. Stir constantly with a wooden spoon over medium-low heat until the custard thickens and coats the back of the spoon. Immediately strain the custard through the fine sieve into the bowl of the stand mixer. Beat the custard with the wire whip at medium speed until it is light and cool. It must be completely cool.

Replace the wire whip with the paddle attachment. Gradually, 2 tbsp at a time, beat in the softened butter at medium speed. When all of the butter has been incorporated, beat the buttercream vigorously for a minute on high speed to make it as light as possible. Reduce the speed to low and gradually add the rum and extract, then increase the speed and beat the buttercream for another minute until it’s light and creamy again.

Transfer half of the buttercream into a pastry bag fitted with a large plain or star tip. Don’t pack all buttercream in the bag at once. You will have to squeeze it only with one hand holding the pizzelle in another, so don’t overstrain your hand. Holding the pizzelle vertically in the left hand (if you are a right-handed), insert the piping tip as far inside as possible and squeeze some buttercream inside. I think it’s ok if the center of the cookie is not completely filled with the buttercream, but it’s up to your preference.

Once the cookies are filled, put them in the refrigerator for the buttercream to firm up. Keep the pizzelle in the fridge in an air-tight container. Bring to room temperature about 15 minutes prior serving. 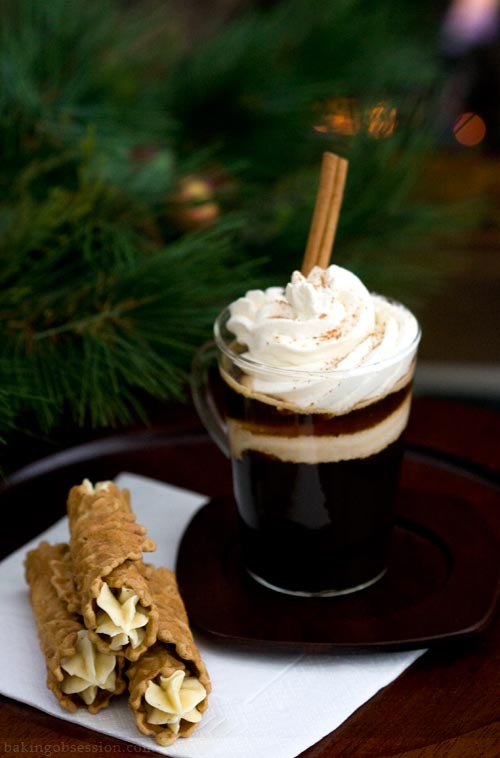