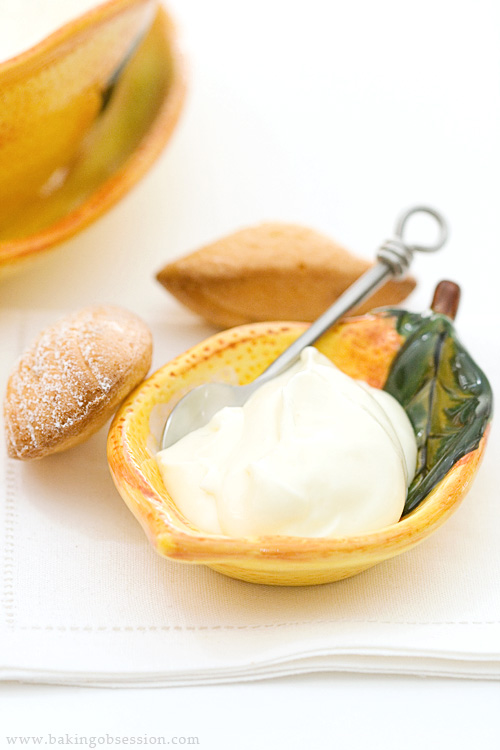 When the weather is as hot as we’ve got here, cool and tangy dessert like this seems soothing and refreshing. I made the pudding late at night, after the summer heat subsided, and the idea of stirring a hot mixture on the stove didn’t look so torturous. The madeleines, unfortunately, can’t be baked in advance (although the batter can, and, actually, should be made earlier). So, I still had to turn my oven on the following day, but only for a brief moment – it took under 15 minutes for the madeleines to bake. And this sort of cookies/cakes  is worth to be made even during the most excruciating heat. 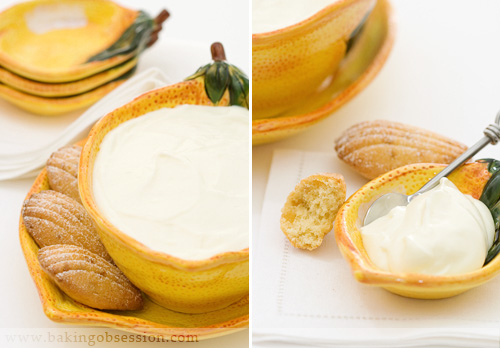 In a medium heavy non-reactive saucepan, whisk together the sugar, cornstarch, and salt. Gradually whisk in the half-and half. Place the saucepan over medium heat and bring to a boil, whisking constantly. Continue cooking, whisking, until the mixture is thickened. Give it a taste (careful – it’s hot); a cornstarch taste should be gone if the pudding was cooked long enough. The total cooking time from the moment the pan is placed on the stove takes about 15 minutes.

Take it off the heat and whisk in the lemon juice. Transfer the pudding to a clean medium bowl and gradually stir in the butter, one piece at a time. Place the bowl into an ice-water bath to cool the pudding; stir often to prevent a skin forming. Cover with plastic wrap, pressing it directly over the surface, and refrigerate up to a day. Whisk the pudding until creamy again before serving.

Butter the madeleine molds very well (don’t grease the molds if they are silicone ones). Set aside.

Over a small bowl sift together the flour, baking powder, ginger, and salt. Set aside.

Place the butter in a small saucepan over medium heat. Cook the butter until it is medium brown and has a nutty aroma, 5-6 minutes. Do not allow to burn. Remove from the heat. Set aside to cool slightly. Strain through a fine-mesh sieve into a small bowl, add the lemon and vanilla extracts.

Meanwhile, while the butter is cooling, combine the sugar and lemon zest in a small bowl. Rub with your fingers to release fragrant lemon oil. Break the eggs into a bowl of the stand mixer fitted with a wire whisk. Whip the eggs on medium-high speed, gradually adding the sugar, until the mixture is thick and pale in color, about 5 minutes. Using a rubber spatula, gently fold in the flour mixture in three additions. Then gradually fold in the brown butter. Fold in the chopped candied ginger.

Spoon or pipe the batter into the prepared molds filling them just below the rim. Cover with plastic wrap and refrigerate for at least 1 hours and up to 3 days. You can also refrigerate the batter in a bowl, and later divide the chilled batter between the molds. But I found it’s easier to do while the batter is in its liquid form.

When ready to bake, center an oven rack and preheat the oven to 375F. Bake the madeleins for about 14-15 minutes, rotating them to 180 after first 10 minutes of baking, until they are puffed and golden brown. Remove them from the oven, unmold immediately. Cool completely on the wire rack. Dust lightly with confectioners’ sugar before serving, if you wish. The cookies are the best the day they are baked.