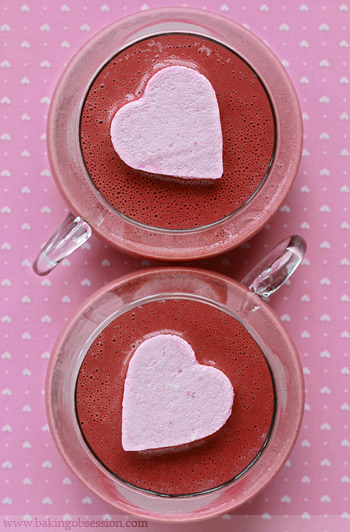 This drink is rich and very good. It’s supposed to be served in tiny demitasse cups. The quantity stated below makes 4 servings; I don’t think that double dates is a common way to celebrate Valentine’s Day, so you can scale the recipe down or just overindulge.

Happy Valentine’s Day for those who celebrates it, and a Wonderful Weekend for everybody else!

Makes 4 servings of hot chocolate and plenty of marshmallows

For the raspberry chocolate:

Make the marshmallows (obviously, these have to be made before the drink if you want to serve them together):

Combine the icing sugar and cornstarch together in a bowl, transfer to a fine-mesh sieve.

Line a 10×15-inches jelly-roll pan with parchment paper. Sift the icing sugar-cornstarch mixture generously over the bottom of the pan. Set aside.

In a small bowl combine the raspberry puree, Chambord, and beet juice; set aside.

Put 1/3 cup of the water, the sugar, and corn syrup in a medium saucepan. Bring the mixture to a boil over medium heat, stirring until the sugar dissolves. Once the sugar is dissolved, continue to cook the syrup without stirring until it reaches 265 F on the candy thermometer, about 10 minutes.

While the syrup is cooking, work on the gelatin and egg whites. In a microwave-safe bowl, sprinkle the gelatin over the remaining water and let sit for about 5 minutes to soften, until, then heat the gelatin in a microwave oven for 20 seconds to liquefy it.

As soon as the syrup reaches 265 F, remove the pan from the heat and, with the mixer on medium speed, add the syrup, pouring it between the spinning beaters and the sides of the bowl. Add the gelatin and continue to beat for another 3 minutes, so that the syrup and the gelatin are fully incorporated. Beat in the vanilla extract. Using a rubber spatula, transfer about a cup of the whipped mixture into the bowl with the raspberry puree. Fold in until incorporated, then fold the lightened raspberry puree into the rest of the whipped egg whites.

Using a large rubber spatula, scrape the mixture into the prepared pan. Then spread it into the corners and level the top. Generously dust the top with the icing sugar-cornstarch mixture to cover it completely. Sift the rest of the cornstarch mixture into a small bowl and set aside. Let the marshmallows set in a cool, dry place, at least for 3 hours.

Transfer the marshmallows, still on the parchment, onto a cutting board. Using a soft brush (I prefer to use a large soft art brush over the pastry one), brush off the excess of the cornstarch mixture. Using a small heart-shape cookie cutter, cut the hearts out of the marshmallow sheet. After each cut, dip the cutter into a bowl with cold water and wipe it dry with a kitchen towel. Transfer the cutouts, few at a time, into the bowl with icing sugar-cornstarch. Turn them to coat, then, using the same soft brush, brush off the excess. Transfer the dusted marshmallows onto a baking rack and let sit for a couple of hours to dry them just a little bit and prevent the stickiness.

Unlike most other goodies, marshmallows don’t benefit from an air-tight container storage; so keep them loosely covered.

Place the chopped chocolate into a blender. In a small saucepan, combine the raspberry puree and whipping cream . Heat over medium heat to the boiling point and pour over the chopped chocolate in the blender. Wait for a minute, then process until homogenous. Add the Chambord and process to combine. Divide between the warm cups and serve immediately topped with the marshmallow hearts if you wish.