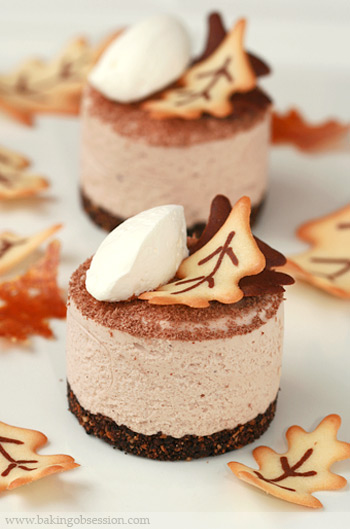 This month Daring Bakers challenge hosted by Karen of Bake My Day and Zorra of 1x umruehren bitte aka Kochtopf was tuiles. There were four different recipes given to choose from including a savory one. First, I had a solid intention to make them all. Then, I waited, and waited a little bit longer… , and then some urgent matter came up…, and I ended up doing the challenge the night before the due date. I basically, fixed it from what I had at home. Procrastination is definitely not a virtue.

The tuiles recipe I used is adapted from “The Chocolate Book” by Angélique Schmeink. I have to say I was surprised how well they retained their crispiness compare to other recipes I tried before. I baked vanilla and chocolate leaf-shaped tuiles, and made some hazelnut brittle leaves as well. I served the cookies with the mousse which was a simple combination of a chestnut puree, mascarpone, whipped egg whites, and rum; I added some gelatin to set the mixture and turn it into mini-tortes. The crust was ground hazelnuts, chocolate cookie crumbs, melted chocolate, and more rum. I sprinkle some grated bittersweet chocolate over the top of the mousse and placed a rum-flavored chantilly quenelle (I was pirating in my previous life) on the top of each serving. There was also a chocolate–caramel sauce (not shown) to decorate the plates.

For the vanilla tuiles:

Center an oven rack and preheat to 325F. Line a cookie sheet with a silicone mat and set aside.

In a small bowl, beat the butter and sugar with a wooden spoon until smooth, add the vanilla extract and mix to combine. Switch to a whisk and gradually add the egg whites. Add the flour, in small batches, and stir to achieve a homogeneous and smooth batter/paste. Be careful to not overmix, you don’t want to aerate the batter. Spoon out ¼-cup of the batter into another small bowl and stir in the sifted cocoa powder (this batter will be used for piping the veins on the vanilla tuils).
Cover the bowl with the vanilla batter with plastic wrap and chill in the fridge for at least 30 minutes to firm up. The batter can be kept in the fridge for up to a week. Do not refrigerate the chocolate batter; transfer it into a piping bag fitted with a small (#2) round tip. And set aside.

Press the leaf stencil ( or any other stencil of your choice) on the prepared baking sheet and use an offset spatula to spread the batter thinly. Leave some room in between your shapes. Use the chocolate batter to pipe the veins.

Bake the cookies in a preheated for about 5-10 minutes (depends on their size) until the edges turn golden brown. Immediately release from the baking sheet and proceed to shape/bend the cookies in the desired shape. These cookies have to be shaped while still warm, you might want to bake a small amount at a time. Cool completely before storing in an air-tight container.

I used 6 round molds with removable bottoms, each is about 2 ½-inch in diameter. You can use tart rings instead.

Lightly spray the bottoms of the molds with oil. Line the sides with acetate or parchment paper. Set aside.

In a small bowl, combine the ground nuts, cookie crumbs, melted chocolate, cocoa, salt, and rum. Stir to combine. If the mixture seems too dry, add a little bit of water, ½ teaspoon at a time. Divide the mixture between the molds and press onto the bottom of each. A tall and slim tequila glass is perfect for packing the crumbs. Refrigerate until firm, at least for an hour and up to a day.

In a medium bowl, whip the cream until soft peaks form. Do not overbeat! Cover with plastic wrap and refrigerate until needed. Don’t wash the beaters, just set aside for a moment.

In the bowl of the food processor, process the chestnut puree with rum, vanilla, and salt (if using) until absolutely smooth, no even tiny lumps should be present.

In a large bowl, using the same beaters that were used for whipping the cream, beat the mascarpone until smooth, add the chestnut puree and beat until well combined. Cover with plastic wrap and set aside.

Bring 1 inch of water to a very light simmer in a wide skillet. In the bowl of the stand mixer, lightly whisk the egg whites and sugar, then set the bowl in the hot water. Whisk constantly until the egg-white mixture is hot to the touch and an instant read thermometer reads 140F. It will take 2 to 4 minutes. Place the bowl with the egg whites to the stand mixer base and whip with a wire attachment on medium-high speed until double in volume and cool.

Meanwhile, in a small bowl, sprinkle the gelatin over the ¼ cup of cold water. Let it soften for a couple of minutes, then microwave on High for 15 seconds (or melt the gelatin in the same water-filled skillet) until dissolved. Gently warm the chestnut-mascarpone mixture to 98F (37C). Whisk a little bit of the chestnut-mascarpone mixture into the gelatin, then whisk the gelatin/chestnut mixture back to the rest of the chestnut-mascarpone mixture in the large bowl. Using a large rubber spatula, fold about one quarter of the meringue into the chestnut mixture, then fold in the rest of the whites. Fold in about one quarter of whipped cream into the mixture, then fold in the rest of the cream. Be delicate, don’t overmix. Transfer the mousse into a large piping bag fitted with a large plain tip and pipe it into the prepared molds dividing equally. Refrigerate to firm up, at least for 2 hours.

When ready to serve, unmold the dessert, sprinkle with grated or shaved chocolate, and top with some whipped cream if you wish.

You can simplify the preparation and serve the mousse from a glass or bowl. To do so, omit the gelatin and don’t warm the chestnut-mascarpone mixture. Proceed as described earlier. Pipe or spoon the mousse into the serving glasses and refrigerate until serving time. 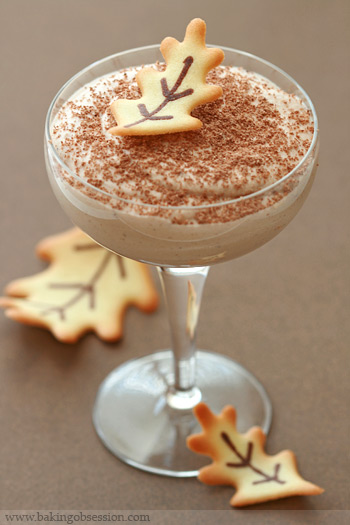