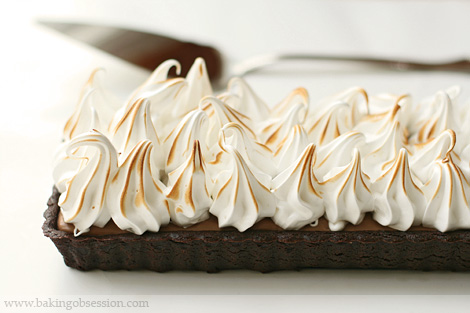 There are total of four layers in this tart and I’m not counting the tart crust as a layer. At the very bottom there are honey roasted salted peanuts covered with fleur de sel caramel. Then goes a layer of barely sweetened tangy sour cream-cream cheese mousse followed by the milk chocolate pastry cream. The egg whites left over after making pâte sablée and pastry cream were turned into Swiss meringue topping and then blow-torched. It tasted fantastic. Every layer is equally thin (well, except the Swiss meringue) and harmoniously compliments each other. The filling is sweet and salty, and creamy; the crust is buttery, chocolaty, crispy and tender.

Some components can be made in advance, but the assembled tart should be enjoyed (and it’s pure enjoyment) the same day it is put together.

Happy Thanksgiving to everyone who hasn’t celebrated their Thanksgiving yet! And I’m off until Saturday. I’ve got a lot of catch up to do visiting your blogs, guys. I haven’t had a lot of time lately, so – my apologies. 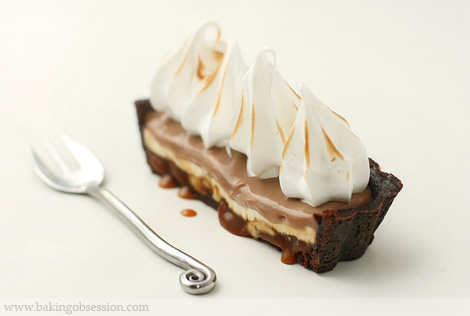 For the tart crust:

For the Swiss meringue topping:

Sift the flour, icing sugar, cocoa powder and salt, put them in a food processor. Scatter the pieces of butter over the flour mixture and pulse until the butter is coarsely cut in. Stir the egg yolks and add them a little at a time, pulsing after each addition. When the yolks are in, process in long pulses until the dough forms clumps, don’t wait until a ball forms. Turn the dough out onto a work surface and knead very lightly just to incorporate any dry ingredients that have not been mixed in. Pat the dough into a ½-inch thick disc, wrap in plastic, and refrigerate for at least an hour.

Butter a 3×14 rectangle or 9-inch round fluted tart pan with removable bottom. Roll the dough between the parchment paper into 1/8-inch thickness and then transfer it into the tart pan. Dock the bottom of the crust with a folk and freeze it for at least 30 minutes. If you are not planning to bake right away, wrap the crust in plastic tightly and keep in the freezer until needed. Do not defrost before baking!

When ready to continue, preheat the oven to 350 F. Preheat the oven to 350 F. Line the tart shell with parchment paper or several large overlapping coffee filters (they are soft and don’t damage the crust). Fill the crust with dry beans or pie weights up to the rim and bake for about 15 minutes, until set. Take the tart shell out of the oven, let it sit on a rack for 10 minutes, then carefully remove the pie weights and parchment paper. Return the tart crust back into the oven and bake for another 8-10 minutes until fully baked. Transfer the crust in its pan to the cooling rack and cool completely before filling. Do not unmold the tart crust at this point.

Stir together the sugar, cream of tartar, and water in a high-sided medium saucepan. Cook over medium heat, stirring occasionally, until the sugar dissolves, then raise the heat to moderately high and boil without stirring, occasionally brushing down the sides of the pan with a wet pastry brush, until the syrup turns deep amber in color. Immediately remove the pan from the heat and slowly pour in the cream. The mixture is extremely hot and will bubble up. Keep your face and hands far away from the pot. Stir with a long-handled wooden spoon until combined. Add the butter, then vanilla extract, and the fleur de sel. Cool until warm but still pourable.

The salted caramel can be made several sdays in advance and kept refrigerated. Rewarm before pouring over the peanuts in the tart shell.

Scatter the honey roasted peanuts over the bottom of the tart shell. Pour the salted caramel sauce over the peanuts. Refrigerate to firm up the caramel, for about an hour.

In another small bowl, using the same hand-held electric mixer with the same attachment (to minimize a cleanup), whip the cream cheese with the granulated sugar until lump-free, smooth and light. Mix in the sour cream, then vanilla extract. Using a rubber spatula, gently fold the whipped cream into the cream cheese mixture in two additions until incorporated. Spread the cream cheese mousse over the chilled caramel-peanut layer.

It’s advisable to make the pastry cream in advance, so, you could smoothly proceed with the following tart assembly. The pastry cream can be made 2-3 days in advance and stored in the refrigerator covered with plastic wrap pressed directly against the surface.

In a medium saucepan, heat the milk to a boiling point. Meanwhile, combine the yolks, sugar, cornstarch, and salt together in a medium bowl, whisk until combined.

Once the milk has reached the boil, temper the yolks by whisking a couple spoonfuls of the hot milk into the yolk mixture. Continue whisking and slowly pour the rest of the milk into the tempered yolk mixture. Pour the egg yolk and milk mixture back into the saucepan and place the pan over the medium heat whisking vigorously and continuously until the mixture returns to the boil. Keep whisking energetically for 1 to 2 more minutes (still over medium heat). Stir in the melted chocolate and then remove the pan from the heat. Quickly strain the pastry cream into a clean bowl set in the ice-water bath. Make sure to continue stirring the mixture at this point so it remains smooth.

Once the cream has reached the temperature of 140F, remove the bowl from the ice-water bath and stir in the butter in two additions. Return the cream to the ice-water bath to continue cooling, stirring occasionally, until it has completely cooled. The cream is now ready to use or store in the fridge. In order to avoid a skin forming on the pastry cream, cover with plastic wrap pressed onto the cream surface.

Now carefully unmold the tart and transfer it onto a serving platter.

Cover with plastic wrap and refrigerate while you are making the Swiss meringue topping.

Bring 1 inch of water to a very light simmer in a wide skillet. In a bowl of the stand mixer, lightly whisk the egg whites, sugar, and salt together, then set the bowl in the hot water. Whisk constantly until the egg-white mixture is hot to the touch and an instant read thermometer reads 140F. It will take 2 to 4 minutes. Place the bowl with the egg whites to the stand mixer base and whip with a wire attachment on medium-high speed until double in volume and cool; the meringue should not move around in the bowl when you are finished. It takes about 6 to 8 minutes. Transfer the meringue into a pastry bag fitted with a large star (or plain) tip and pipe tall kisses over the chocolate pastry cream layer. Following a manufacturer’s instruction and applying all necessary safety measures, blow-torch the meringue. Serve.