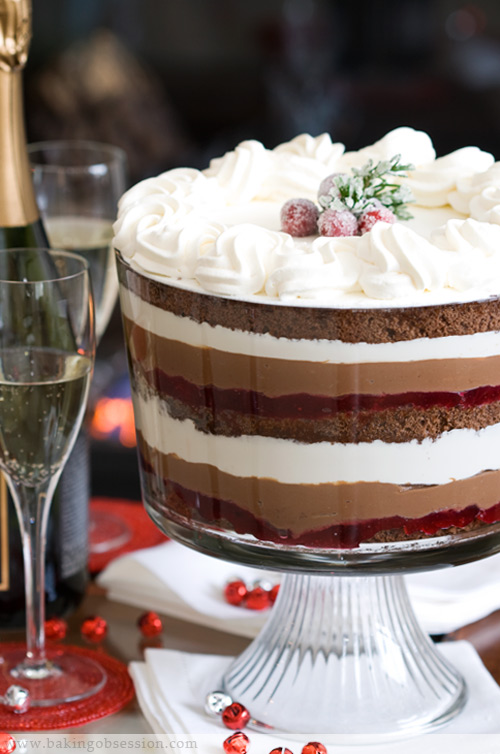 This is not a traditional English trifle. There is no dense pound cake, crème anglaise, and whipped cream inside. My trifle is assembled from light chocolate génoise soaked in Grand Marnier syrup, freshly made cranberry sauce, chocolate pastry cream, and tangy cream cheese-sour cream mousse. The whipped cream is only a topping here.

If you haven’t decided what dessert to make for the New Year celebration, you might want to consider this trifle. It is absolutely delicious, it can be made well in advance and the whole prep can be stretched over several days, so you definitely wouldn’t exhaust yourself preparing it. If you don’t have a large trifle bowl, the dessert can be assembled in individual little bowls or brandy glasses. In this case, you will only need two layers of génoise to fill the glasses.

For the chocolate génoise (it should be made the day the trifle is assembled, since the génoise sheet is thin and dries out quickly):

The génoise recipe is adapted from Paul Bugat.

For the cranberry sauce:

For the chocolate pastry cream:

For the cream cheese mousse:

For the whipped cream topping:

Lightly brush a 13X18-inch jelly roll pan with melted butter or spray with oil, line with parchment paper, then butter the paper. Set aside.

Sift the flour, cocoa, and cornstarch together three times; return to the sifter and set aside.

In a bowl of your electric mixer, using a whisk, combine the eggs, sugar, and salt thoroughly. Place the bowl in a wide skillet of barely simmering water. Whisking constantly, heat the eggs to lukewarm (about 105F). Remove the bowl from the pan; leave the skillet on the stove but turn off the heat. With an electric mixer, beat the egg mixture at medium-high speed until it has cooled, tripled in volume, thickened and become almost white in colour, about 5 minutes in a heavy-duty mixer or longer with a less powerful mixer.

Bake until the génoise is set but not crusty, about 12 minutes.

In a small saucepan, combine the water, sugar, and orange peel. Heat over the medium heat, stirring, until the sugar dissolves and the syrup comes to the boil. Cool. Remove and discard the peel. Right before using, stir in the liqueur.

In a large saucepan combine the sugar and orange zest, rub with your fingers. Add the cranberries and orange juice. Bring to a boil over medium-high heat, then reduce the heat and simmer gently for about 7- 10 minutes, until the berries get soft, most of them pop, and the sauce thickens. Remove from the heat and stir in the liqueur.

Can be made several days in advance and stored, covered, in the refrigerator.

In a small saucepan, bring the milk to the boil over the medium heat. In the meantime, combine the eggs, sugar, cornstarch, and salt in a medium bowl and whisk together.

Pour the egg-milk mixture back into the saucepan and place the pan over the medium heat. Whisk vigorously and continuously until the mixture thickens and the cornstarch taste is gone (about 3-4 minutes). Off the heat, whisk in the chocolate until it’s melted, and then immediately strain the pastry cream into a small bowl set into the ice-water bath to stop the cooking process. Whisk in the vanilla extract. Continue stirring the mixture at this point so it remains smooth. Once the cream has reached the temperature of 140F remove it from the ice-water bath and stir in the butter in two additions.

Cool, stirring occasionally, to prevent skin forming. Cover with plastic wrap pressing it directly over the surface of the pastry cream and refrigerate until needed.

Can be made up to 2 days in advance.

Before making the mousse, cut out 3 circles from the génoise sheet. You should be able to cut out 2 whole circles and make the third one (the smallest bottom one) from two halves. Fit the smallest circle into the bottom of the trifle bowl, brush generously with the syrup. Spread half of the cranberry sauce over the génoise, then spread half of the chocolate pastry cream. Set aside while making the cream cheese mousse (it takes basically no time).

Can be made up to 3 days in advance.

Close to the serving, combine the cream, sugar, and vanilla extract in a chilled bowl. Whip until medium peaks form. Spread a thin layer over the soaked génoise layer. Transfer the remaining cream into a pastry bag fitted with a large star tip and pipe a border.

Decorate with candied cranberries and rosemary, if you wish.

To serve, spoon into individual bowls or glasses. Make sure to scoop through all different layers.