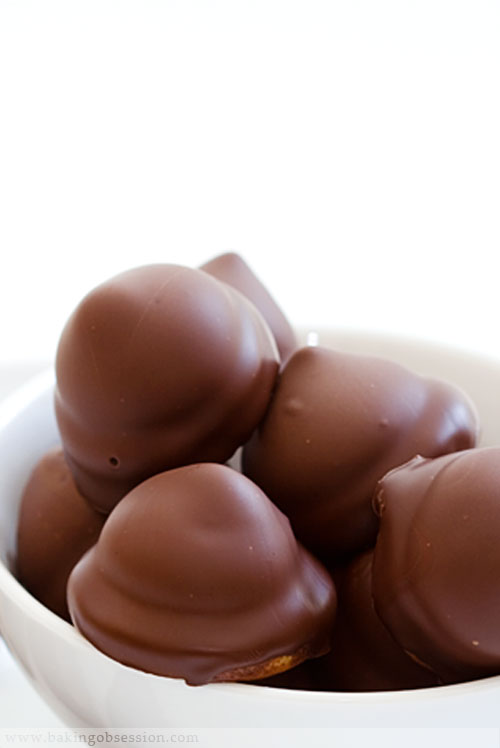 Finally, here’s a long ago promised post, part two of the DB challenge. The recipe (another Gale Gand’s) makes an enormous amount of cookies. It seemed a bit boring to make them all plain vanilla (by the way, there’s not even remotely enough vanilla extract stated to make decent-flavored marshmallows, may I say). I made four different kinds as follows:

Unfortunately, I can’t show you the insides of the cookies. I accidentally deleted these photos from my camera before I had a chance to upload them into the computer. It has never happened before… I need a vacation, I guess.

The recipe below is an adaptation of Gale Gand. 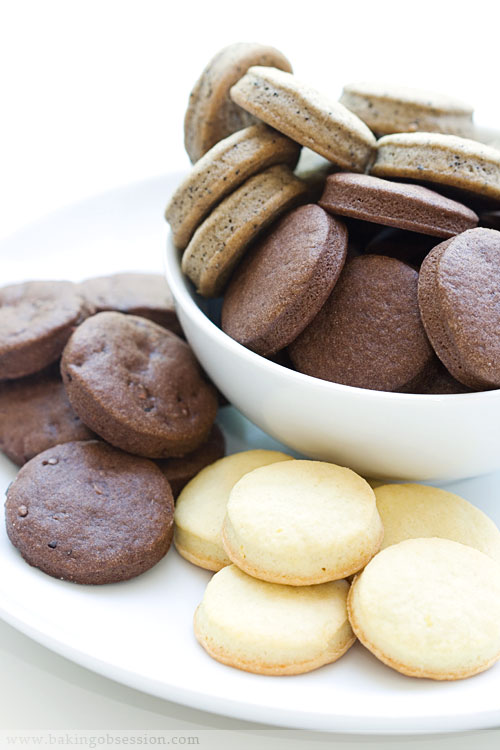 Makes about 3 dozens of each

For the marshmallows (I made two batches altogether (one at a time), divided each batch in half and then flavored differently):

For the chocolate and cinnamon-chocolate marshmallows:

For the blackberry and coffee marshmallows:

For the chocolate glaze: 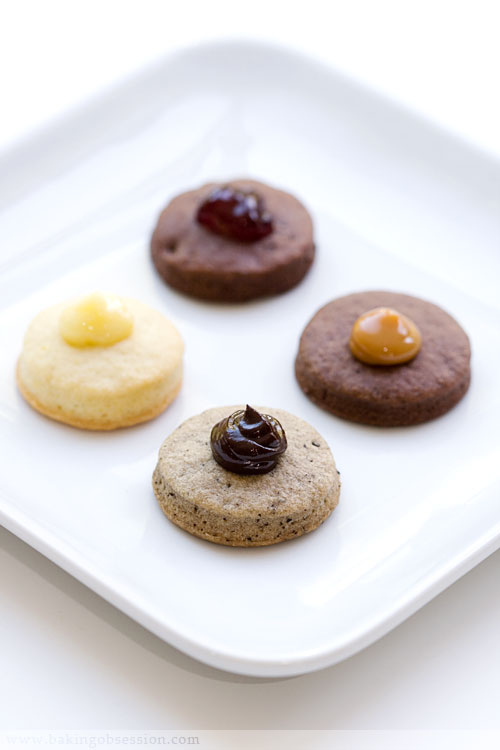 In a large bowl, using an electric mixer, beat the butter until fluffy. Gradually beat in the sugar and salt and continue mixing until light and well combined. Beat in the vanilla extract, then the eggs, one at a time. Divide the mixture between two medium bowls. Add the cocoa-flour mixture to one bowl and the plain flour to the other. Mix on low speed just until combined. Again, divide each portion in half. Add the nibs to the first, cinnamon to the second, lemon extract and zest to the third, and the ground espresso beans to the fourth. Form each portion into a disc, wrap in plastic and refrigerate for at least 2 hours, better-overnight. The dough can be refrigerated up to 3 days.

Center an oven rack and preheat the oven to 375F. Line cookie sheets with parchment paper or silicone mats.

When ready to bake, on a lightly floured surface, roll out the dough to 1/8-inch thickness. Cut out 1 to 1 ½ inch rounds. Transfer to the prepared baking sheets and bake, in batches, for 10 to 12 minutes or until light golden brown. Cool on a rack.

Place the baked earlier and completely cooled cookies on two large baking sheets or racks. Pipe or spoon a small dab of filling into the center of each cookie.

In a medium saucepan, combine the sugar, corn syrup, and water. Bring the mixture to a boil over medium heat, stirring until the sugar dissolves. Once the sugar is dissolved, continue to cook the syrup without stirring until it reaches 235F on the candy thermometer, “soft-ball” stage.

Meanwhile, sprinkle the gelatin over 2 tbsp water and let sit for about 5 minutes to soften, then heat the gelatin in a microwave oven for 15-20 seconds to liquefy it.

As soon as the syrup reaches 235F, remove the pan from the heat and, with the mixer on medium speed, add the syrup, pouring it between the spinning beaters and the sides of the bowl. Add the gelatin and continue to beat until stiff peaks form, about 5 minutes. Beat in the vanilla extract. Divide the mixture between two medium bowls. Using a rubber spatula, fold in the flavorings into each half.

Transfer the meringue into a piping bag and pipe a “kiss” of marshmallow onto each cookie, covering the filling completely. Let set at room temperature for 2 hours.

Once set, dip the cookies into the tempered chocolate and leave at room temperature to set.

Jam-filled marshmallows can be kept at room temperature for several days; the ones filled with perishable lemon curd, however, should be consumed the same day they are assembled.