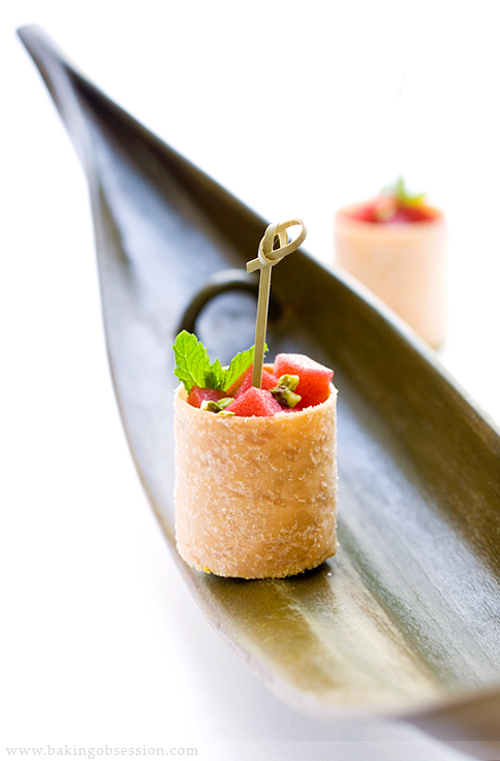 This month’s Daring Bakers challenge, hosted by Jenny from JennyBakes, was Abbey’s Infamous Cheesecake. My sincere thank you to Jenny not just for hosting, but also for not limiting us with rules and restrictions, for providing with an opportunity to create a dessert suiting everyone’s taste. We were free to choose any flavor combination as well as presentation options.

I didn’t change the original cheesecake recipe, except for omitting a graham crust (I’m not very fond of it, to be honest) and adding a tablespoon of flour to the batter (an old habit, couldn’t help myself). I scaled the recipe down, but baked the cheesecake in a required 9-inch pan, so the cake was not too tall and could be easily cut into small rounds. These cheesecake cut-outs were fit inside crispy caramelized phyllo tubes (cylinders) baked earlier. Sticky cheesecake bottoms were then dipped into coarsely ground pistachios creating some sort of a crust and preventing the dessert from adhering to a serving platter. The mint infused white chocolate mousse was piped over the cheesecake and, after the mousse was set, the strawberry gelée, cut into small cubes, was piled over the mousse layer. A little bit more of the pistachios and fresh mint leaves for garnish completed the picture.

They are easy to handle, small-portioned, one-bite (ok, maybe two-bites for some of us, always struggling with those huge sushi rolls as I am) dessert which I found satisfying enough and sufficient for serving one per person (after a good meal).

For the phyllo tubes:

For the strawberry gelée:

Make a cylinder mold from cardboard, or use a core from a paper towel roll (these centers are easily extracted just by pulling them out). Wrap the cylinder into foil, spray lightly with oil, and then roll into parchment paper (the oil spray will help the parchment to adhere). Set aside. It’s worth to make several molds to speed up the baking process.

Cover a working surface with a large sheet of parchment paper. Place 1 sheet of phyllo on the parchment paper, with one long side parallel to the edge of the work surface. Brush the phyllo sheet with the melted butter, and sprinkle with a tablespoon of sugar. Cover the rest of the phyllo with plastic wrap first and then with a damp dish towel (avoid a direct contact of the phyllo with the wet towel to prevent the phyllo from getting soggy). Repeat with two more phyllo sheets brushing the top of the last (third) sheet with the butter and sprinkling with the sugar.

Using a pizza wheel, cut the stacked phyllo vertically in half, then cut it in half horizontally (you will get four rectangles). Cut each of four rectangles horizontally into three equal strips. Wrap each strip, buttered and sugared side up, around the prepared mold. You might need to shorten the strip a little bit, so an overlapping is about ½-inch. Brush the overlapping ends with egg white and press to seal. While you are working on one strip, keep the rest of the phyllo covered with plastic wrap first and then with a damp towel. Work quickly. Place the mold (molds), seam side down, onto the prepared baking sheet and bake for about 10-12 minutes, until golden brown. Cool the phyllo tubes completely on the mold on a cooling wrap. Once cooled, gently pull the parchment ,with the phyllo tubes on, out of the foil-wrapped mold. Remove the parchment. Store the tubes in an air-tight container at room temperature for up to several days.

Center an oven rack and preheat the oven to 350 F. Line a bottom of the 9-inch springform pan with parchment paper circle. Lightly butter the parchment and the sides of the pan. Wrap the pan tightly in a double layer of heavy-duty aluminum foil. Set aside.

In the bowl of a stand mixer (or in a large bowl if using a hand-held electrical mixer) beat the cream cheese at medium-low speed until creamy, about 2 minutes. With the mixer on low, gradually add the sugar, then the flour, and salt. Don’t forget to scrape the sides of the bowl. Mix in the lemon juice and vanilla. Beat in the eggs, one at a time. Add the cream working on the low speed. Do not overbeat.

Pour the batter into the pan and tap the pan on the counter a few times to bring all air bubbles to the surface. Place the springform in a large roasting pan and pour hot water into the roasting pan so that it comes about halfway up the springform. Transfer carefully to the oven and bake for 25 minutes (it will not appear set at this moment). Turn off the oven. Let the cake stand in the oven for another hour. Transfer the springform pan onto the rack and cool completely. Cover; chill the cake overnight.
Next day run a knife around the edge of the cake to loosen and remove the side of the pan. Using a round cookie cutter (just a bit smaller than the diameter of your phyllo tubes), cut out 12 rounds from the cheesecake. You can do it in advance and keep the cut-outs in the fridge, but do not fit them inside the phyllo tubes yet.

Make the mousse, assemble the pastries:

A night before assembling, combine the cold cream and coarsely chopped mint leaves in a bowl. Cover and refrigerate for 12 hours. Strain the infused cream, pressing gently on the leaves.

The whole dessert should not be assembled more than 2 hours in advance to keep the phyllo nicely crisp. Plan accordingly.

Dip the cheesecake bottoms into the ground pistachios and place on a platter. Place into the fridge while making the mousse.

Whip the cream in a medium bowl only until very soft peaks form – when you tilt the bowl, it should flow to one side, fluffy but still pourable and not at all stiff. Scrape the cream into the bowl of chocolate and fold carefully but quickly just until combined. The mousse should seem too soft; it will firm up later. Immediately, while the mousse is still soft, pour it over the cheesecake rounds, leaving about ½-inch rim above. Chill until set, about an hour.

Cut the strawberry gelée into small cubes, using a lightly oiled knife. Place the cubes over the mousse. Sprinkle some pistachios over the top and garnish with the mint leaves. Serve at once.