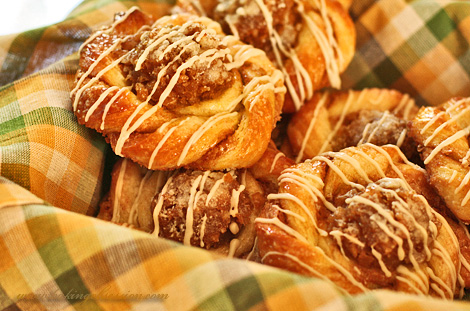 Here is the thinly rolled Danish dough (the half of the recipe given above) spread with cinnamon cream, folded in half, then cut into stripes and twisted-coiled. The centers are generously filled with apples sautéed in butter with an addition of brown sugar, lemon and orange zest, and spices. Then the streusel topping is sprinkled on the top of the Danishes. After the Danishes have been baked orange flavored sugar glaze drizzled over completes the picture.

For the cinnamon cream:

For the egg wash:

For the apple filling:

For the streusel topping:

For the clear glaze:

For the sugar glaze:

With the electric beaters beat the butter, cinnamon and sugar until light and fluffy. Add the egg white and mix for a couple of minutes until well incorporated. Transfer to a small container, cover tightly and refrigerate until needed. At the moment you are ready to spread the cream over the dough, the cream has to be cool but not hard and difficult to spread. So, you might need to let it sit on the counter for a little while if you prepared the cream well in advance and kept it in the fridge for long.

Melt the butter in a heavy large skillet over the medium-high heat. Add the brown sugar. Cook until a grainy sauce forms, about 1 minute. Mix in the apples. Cook until the apples are tender and the sauce is reduced to glaze, about 7-10 minutes, stirring often. Add the zest and spices. Cool slightly, then pulse in a food processor. Don’t puree the apples. Can be made a day ahead and kept in a fridge.

In a food processor fitted with a steel blade, combine the flour and sugar. Add the butter and pulse until a coarse meal forms.

In a heavy saucepan, bring all of the ingredients to a rapid boil. Remove from the heat and let cool. Store in the refrigerator for up to 1 month.

Assemble and bake the pastries:

Line a large baking sheet with parchment paper. Set aside.

On a lightly floured surface, roll the dough into a 12 x 12-inch square, ¼ inch thick. Trim the edges straight and brush off any excess flour. Spread the cinnamon cream over the half of the dough leaving about ¼ inch from the edge free from the cream. Fold another half of the dough over the filled half, and pinch the edges to seal. You got a 6 x 12-inch rectangle to work with.

Cut the rectangle in half lengthwise (use a pizza wheel if you have one). Then cut each rectangle into 4 stripes (8 strips total), each one about 2/3-inch wide. Pick up one strip and pinch one end to the working surface as you lift the other end up, and begin twisting and, at the same time, coiling it around the other end on the surface. Continue twisting and coiling around clockwise and tuck the tail end underneath. The work is messy, be prepared. Some of the cream will ooze onto the counter, it’s ok. Repeat with the remaining stripes.

Meanwhile, center an oven rack and preheat the oven to 375F. After the pastries have risen bake them for about 25 minutes, until nicely browned, rotating the baking sheet halfway through to ensure even baking.

Cool the baked pastries on a rack for 5 minutes, then brush them with the clear glaze.

Make the sugar glaze and finish the pastries:

Whisk the ingredients together until completely smooth. If the glaze is too thick, add a little bit of the orange juice or water until the glaze reaches the right consistency for drizzling.

When the pastries have cooled, set the rack with the pastries over a baking sheet and drizzle the sugar glaze over the tops. 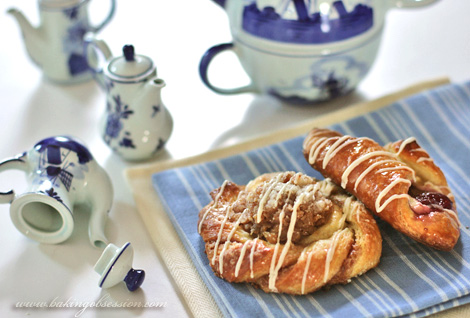