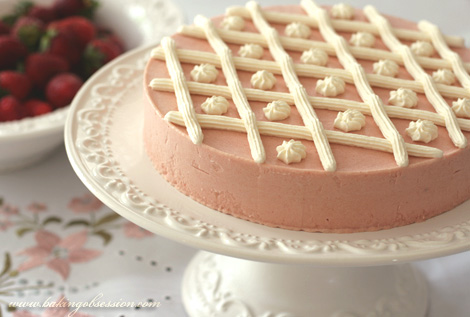 I should have mentioned in my previous post that the rhubarb I used came from my dear and very generous friend Olya. She presented me with a huge bag stuffed with beautiful, bright red organic rhubarb stalks fresh from her garden. I’m extremely grateful to her for such a wonderful gift. And below is another recipe using the rhubarb. The sweet and crisp meringue layers contrast nicely with the creamy and tangy rhubarb-strawberry filling. The whole thing is frozen in a ring mold or a springform pan without any ice-cream maker involvement. Serve the torte with some macerated strawberries for a refreshing summer treat.

For the rhubarb cream:

For the decoration (optional):

Center an oven rack and preheat the oven to 200F. Using a 8-inch-diameter tart pan bottom as guide, trace 2 circles onto a large sheet of parchment paper. Place the paper, marked side down, on a large baking sheet. Set aside.

Using an electric mixer, beat the egg whites in a large bowl until frothy. Add the cream of tartar and salt; beat until soft peaks form. Beat in the all but one-third of the sugar (scant ¼ cup), 1 tablespoon at a time, then beat until the whites are stiff and glossy. Using a rubber spatula, gently fold in the remaining one-third of the sugar. Spoon the meringue into a large pastry bag fitted with a 1/2-inch plain tip. Starting in the center of each traced circle and holding the tip just above the paper, pipe an ever-widening spiral of the meringue to cover the entire circle. Or simply divide the meringue equally between the circles and spread it evenly with a small offset spatula or a spoon.

Combine the rhubarb, strawberries, 1/2 cup sugar, water, lemon zest, and lemon juice in a medium saucepan. Bring to a boil over medium heat, stirring to dissolve the sugar. Reduce the heat and simmer until the rhubarb is very tender, about 10 minutes. Puree the mixture in a processor or a blender. Put the mixture through a fine strainer. Cool.

Bring 1 inch of water to a simmer in a wide skillet. Turn the burner off . In a large heat proof bowl, whisk the yolks and 1/3 cup sugar to blend. Set the bowl in the hot water. Whisk constantly until the mixture thickens and an instant-read thermometer registers 140°F, about 8-10 minutes total. You might need to return the skillet to the lowest heat to reach the desired temperature of the egg yolks. Immediately, place the bowl into the ice water to chill. Chill the mixture until cool, whisking. Gently fold the rhubarb mixture into the yolk mixture in 3 additions. The cream at this point can be made a day ahead of assembling. Cover the cream with plastic wrap pressed directly against the surface and keep the cream in the refrigerator. Using the electric mixer, beat the whipping cream and vanilla in medium bowl until stiff peaks form. Fold the cream into the rhubarb mixture in 2 additions. If you haven’t already eaten too much of this, you should get about 5 cups of the cream. Proceed with the assembling.

Wrap a hot wet towel around the sides of the pan, or gently blow warm air with your hair dryer to ease the unmolding. Release the pan sides. Transfer to a serving platter. Place in the freezer while whipping the cream for the decoration. Whip the ½ cup of the cream with the icing sugar and vanilla extract until just firm peaks form. Transfer into a piping bag fitted with a small star tip and pipe the cream decoratively on the top. Don’t choose too elaborate design. This is the ice cream torte which can melt if left outside the freezer for too long. Be quick. Return the torte to the freezer before serving. Cut the torte with a wet, dipped in cool water knife. Serve the torte with lightly sweetened strawberries, if desired. 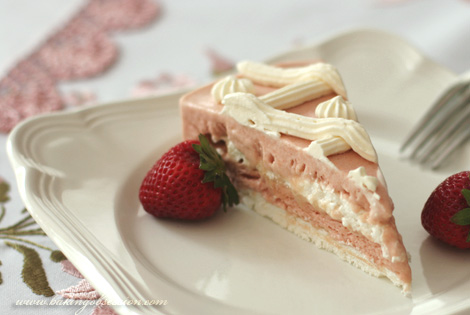