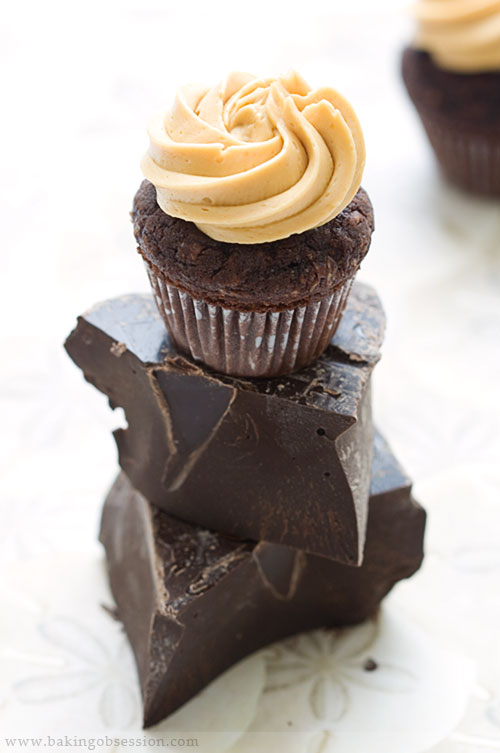 I had almost started making these when I realized I was out of praline paste. I did want the frosting to be caramel, but I didn’t have neither intention nor time for making praline at that moment. Instead, I quickly fixed caramel crème anglaise and then turned it into the buttercream. I liked the outcome. The caramel flavor was there, and the texture was perfect for piping – soft, but also very stable.

Makes 12 regular-sized cupcakes or 24 mini ones

For the caramel buttercream:

Center an oven rack and preheat the oven to 350F. Fit parchment liners into cupcake molds. Spray the liners lightly with oil spray.

Sift the flour, cocoa, baking powder, soda, and salt onto a sheet of parchment paper or into a bowl. In another bowl, combine the sour cream, coconut milk, and extracts.

In a large bowl, beat the butter with an electric mixer for a few seconds, until creamy. Gradually add the sugar and beat until light and fluffy, 6 to 7 minutes. With the mixer on medium, add the egg and beat well. Reduce the speed to low and add the dry ingredients in three additions alternating with the sour cream-coconut milk mixture, starting and ending with the dry ingredients. Scrape the bowl as necessary, and beat only enough to incorporate the ingredients after each addition. Stir in the toasted coconut.

Transfer the cupcake batter into a large pastry bag fitted with a large plain tip and pipe the batter into the prepared molds filling them about ¾-full. Or you can use a spoon.

Bake the cupcakes for about 18 to 20 minutes, until puffed and a cake tester comes out clean. Cool the cupcakes for 5 minutes on a cooling rack, then unmold and cool completely on the rack before frosting.

In a high-sided large saucepan, stir together ½ cup sugar and 2 tbsp water. Cook over medium heat, stirring occasionally, until the sugar dissolves, then raise the heat to moderately high and boil without stirring, occasionally brushing down the sides of the pan with a wet pastry brush, until the syrup turns deep amber in color.

Meanwhile, combine the cream and milk together (or use half-and-half) and heat until hot (it will minimize the splatter).

When color is achieved, take the pan off the heat and very carefully pour in the hot cream (pour through a sieve to protect yourself from extremely hot splatter). It is very dangerous, so have long sleeves on and be prepared to step back. Place the saucepan with the caramel-milk mixture over medium heat and whisk until the caramel is completely dissolved. Keep heating the mixture, stirring often, just to a boiling point.

Meanwhile, in a large bowl, whisk together the yolks, two remaining tablespoons of sugar, and salt. Temper the yolks by whisking a couple spoonfuls of the hot caramel milk into the yolks. Continue whisking and slowly pour the rest of the milk into the tempered yolk mixture. Pour the egg yolk and caramel milk mixture back into the saucepan and place the pan over the medium/low heat stirring continuously with a wooden spoon until the mixture coats the back of the spoon. Remove from the heat and immediately strain the mixture through a fine-mesh strainer into the stand-mixer bowl. Beat the custard with the wire whip at medium speed until it is light and cool. Make sure the custard is completely cool before adding the butter.

Replace the wire whip with the paddle attachment. Gradually, 2 tbsp at a time, beat in the softened butter at medium speed. When all of the butter has been incorporated, beat the buttercream vigorously for a minute on high speed to make it as light as possible. Reduce the speed and beat in the vanilla and rum. Increase the speed once again and beat the buttercream for another minute, until it’s light and creamy.

To frost the cupcakes, transfer the buttercream into a piping bag fitted with a large star tip and pipe a rosette over the top of each cupcake. Refrigerate to firm up the frosting. Remove the cupcakes from the fridge 30 minutes prior the serving time. The cupcakes can be made a day in advance and kept in the refrigerator in an air-tight container. 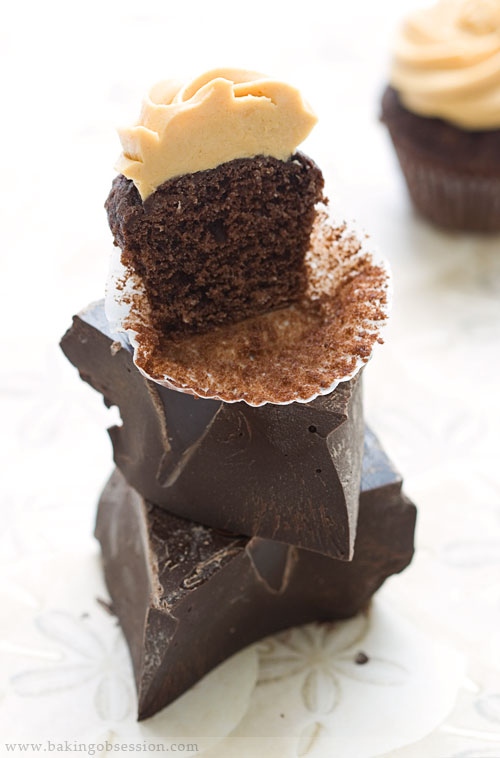