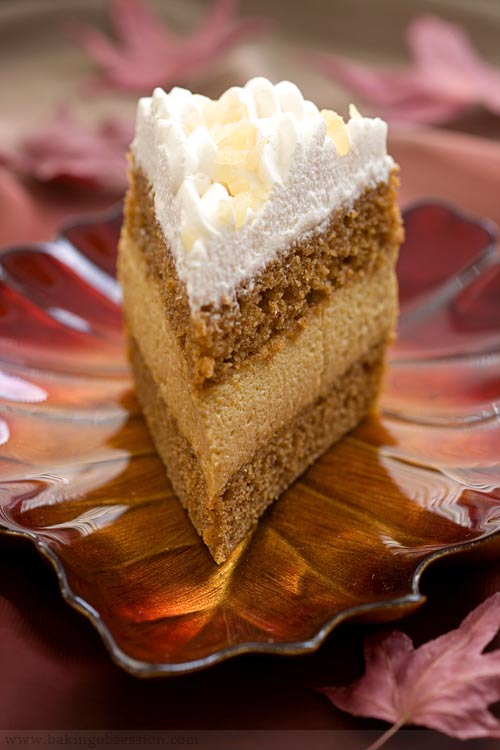 I’ve already told you (I’m afraid more than once) about my relationship with pumpkin-based desserts. I like it, but only when the pumpkin is seriously diluted and lightened. This cake belongs to the same category “for pumpkin pie haters”. And this is my family’s favorite autumn cake.

Makes one 9-inch cake, about 16 servings

For the pumpkin cake layers:

For the pumpkin brandy mousse:

For the maple whipped cream topping:

Center an oven rack and preheat the oven to 350F. Butter and flour two 9-inch round cake pans, knocking out the excess of the flour. Line the bottoms of the pans with parchment paper circles. Set aside.

Sift or whisk the dry ingredients in a large bowl. In a large liquid measuring cup whisk the oil, pumpkin puree, eggs, and vanilla extract until well combined. Pour the mixture into the dry ingredients and mix to combine. Stir in the pecans if using. Divide the batter between the prepared baking pans and bake for about 25 minutes or until the cakes are golden brown and a cake tester inserted in the center comes out clean. Cool for 10 minutes in the pans on a cooling rack, then unmold and cool completely on the rack.

The cake layers can be made a day in advance and kept at room temperature well-wrapped.

Line a 9-inch springform pan or a cake ring (place the ring on a serving platter or baking pan) with parchment paper or acetate strip. Fit a cardboard cake circle inside the ring if you plan to move the cake later. Fit in the first pumpkin cake layer inside the ring. Set aside.

Bring 1 inch of water to a light simmer in a wide skillet. Reduce the temperature to the lowest setting. In a medium bowl, whisk together the egg yolks, sugar, pumpkin puree, salt, and spices. Set the bowl into the hot water. Whisk constantly until the temperature reaches 160F. Strain the mixture through a fine-mesh sieve into a large clean bowl and cool until barely warm, stirring occasionally, to prevent skin forming.

Meanwhile, make Italian meringue: in a small saucepan combine the sugar and water and stir over medium heat until the sugar is dissolved. Stop stirring and heat the syrup to 244F. When the temperature of the sugar syrup reaches about 220F, start whipping the egg whites with the whisk attachment of the stand mixer. Once the egg whites form firm peaks and the syrup reaches 244F, pour the sugar syrup into the whites in a thin stream while continuing to whisk on high speed. Whip for 1 minute on high, then reduce the speed to medium and continue to whip until cool (approximately 5 minutes). The meringue should be thick and glossy.

While the meringue is whipping, pour the brandy into a small microwave-safe bowl and sprinkle the gelatin over. Let it sit for a couple of minutes, then melt it in a microwave or in a double boiler (do not boil). Whisk in about 2 tablespoons of the slightly warm pumpkin mixture into the melted gelatin, then whisk this mixture back into the pumpkin-egg yolk mixture, whisk well to thoroughly combine. Delicately fold the Italian meringue into the pumpkin base in two additions.

In a large, chilled bowl whip the cream until soft peaks form. While still whipping, gradually beat in the maple syrup. Continue beating until firm peaks form, but don’t overdo. Spread or pipe the cream over the top of the unmolded cake. Sprinkle the crystallized ginger over the whipped cream topping right before serving.