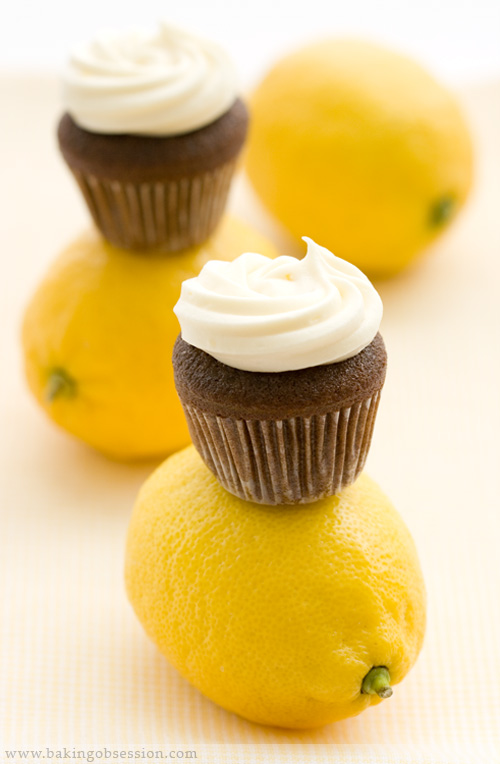 I made these little cakes for my son’s school birthday party. We’d been arguing for a while if they should (or should not) have colored sprinkles on their tops. Tim kept saying that the sprinkles could significantly increase the cupcakes’ popularity. Well, I had my own counterarguments, and I won after all. They were very well received nevertheless. The cupcake batter is a famous Flo Braker’s devil’s food cake; the one that Alice Medrich tried to improve but couldn’t make it any better. It is delicious, moist and tender, very American, but without so commonly excessive overalkalized cocoa flavor.

Fit parchment mini-cupcake liners into 48 mini-cupcake molds. Spray the liners lightly with oil spray (the cupcakes are tiny, you don’t want to waste anything that sticks to the liners).

Center an oven rack and preheat the oven to 350F.

In a large bowl, beat the butter with an electric mixer for a few seconds, until creamy. Gradually add the sugars and beat until light and fluffy, 6 to 7 minutes. With the mixer on medium, slowly add the eggs, taking about 2 minutes in all. Continue to beat, scraping the bowl as necessary, until the mixture is fluffy and velvety.

Transfer the cake batter into a large pastry bag fitted with a large plain tip and pipe the batter into the prepared molds filling them about ¾-full. This is the easiest way to equally divide the batter between so many mini-muffin molds. Although you also can use a spoon.

Bake the cupcakes for about 14-15 minutes, until puffed and a cake tester comes out clean. Cool the cupcakes for 5 minutes on a cooling rack, then unmold and completely on the rack before frosting.

In a large bowl, beat the cream cheese with electric beaters until smooth and lump-free. Beat in the butter, mix until well combined. Then beat in the sour cream, icing sugar, zest, and extracts. Continue mixing until combined and light in texture, scraping the sides of the bowl as needed.

Transfer the frosting into a piping bag fitted with a large star tip and pipe a rosette over the top of  each cupcake. Refrigerate to firm up the frosting. Remove the cupcakes from the fridge 30 minutes  prior the serving time. The cupcakes can be made a day in advance and kept in the refrigerator in an air-tight container. 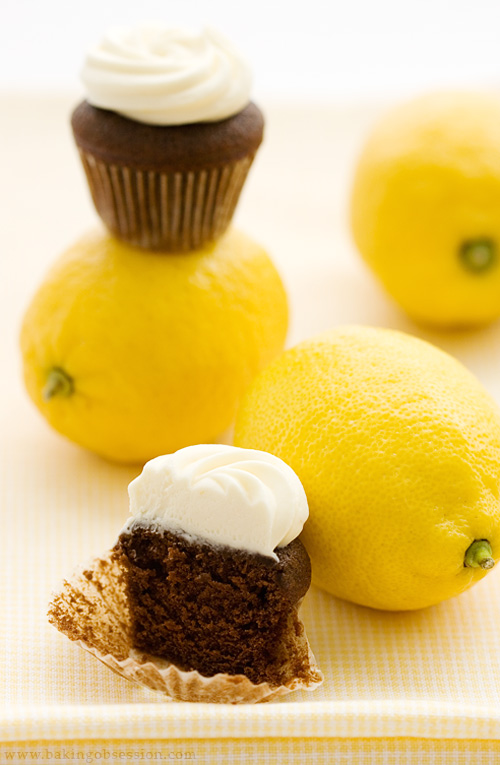