Princess Cake for a Little Girl 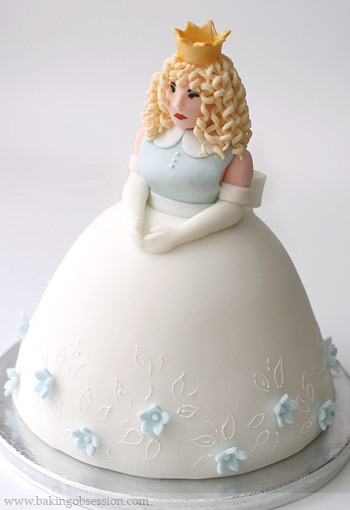 If a little girl wants a princess cake for Christmas, especially if this day happens to be her 4th birthday, she gets it.

I wish I had a bit more time for this project. I had an elaborate midcentury design for the princess’s dress in mind. But being pressed on time, I put this idea aside. There even was a moment when I thought I had to go with a store-bought doll cake-topper. While very nicely tanned and pretty, the Wilton’s Barbie was shamelessly shedding her hair. I tried to give her a haircut (I’m not much of a groom), but her bare scalp started to shine through. So, I decided to make my own princess. Maybe not as attractive as Barbie, at least my princess wasn’t suffering from a severe form of alopecia.

I’m not completely satisfied with the result. It’s advisable to let the head dry after it’s been formed and only then proceed with the body modeling and the head attachment. Initially, my princess’s face was better defined; she had nicely shaped cheek bones. But since I had to finish all in one day, her beauty suffered. It would be also better to paint-brush her face instead of using thick-tip edible markers (I suspect my little son snatched my thin brush for one of his art projects).

The cake itself was delicious (it was a chocolate cake of total 5 layers filled with whipped milk chocolate ganache and covered with Swiss vanilla buttercream). The girl was more than happy. She called me personally to say thank you. That made me happy, too.