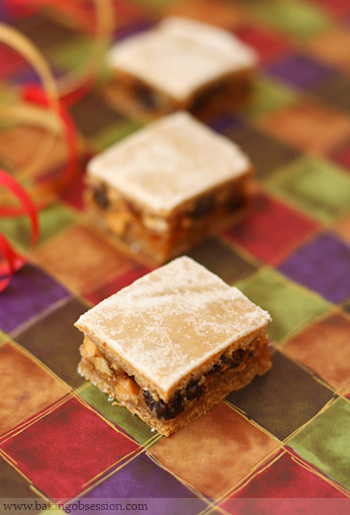 Thanksgiving is finally over everywhere and now I can return to my cookies, this time – very christmasy ones. I’ve been willing to share this recipe for a while but it didn’t seem quite appropriate back then. This is a traditional German lebkuchen sandwiched with a moist and flavorful filling of apricot jam, raisins, candied orange peel, and toasted almonds. The dough is a variation of the well known in North America gingerbread, but the taste here is far more complex and interesting. The honey takes place over the molasses, and the spices differ, with the cardamom playing the first role. The cake is intensely spiced, sweet, moist, and although it’s very good freshly made; the flavor and texture are getting even better over time. So, it’s best to bake the lebkuchen right now and keep them until around Christmas. I baked the first trial batch about two weeks ago, and by this time the squares (well, a couple of survivors) have turned into the moist (not wet or soggy) delectable confection-like treat, so perfect with a cup of coffee or strong tea.

The recipe is adapted from an old charming book “Festive Baking – holiday classics in the Swiss, German, and Austrian traditions” by Sarah Kelly Iaia.

Makes about 4 dozens plus a lot of trimmings for a baker to snack.

For the best flavor, make the cookies several weeks in advance.

Sift the flour onto one sheet of wax or parchment paper and the other dry ingredients onto another. In a large heavy saucepan heat the honey, sugar, and butter together over low heat, stirring all the time until the butter has melted and the sugar has dissolved, Do not allow the mixture to boil. It’s important to heat the fat, sugar, and honey sufficiently to allow the sugar to dissolve, but not let the mixture come to a boil as a certain amount of evaporation will occur, making the gingerbread brittle. Remove the pan from the heat. Stir in the sifted spices. Gradually, using a wooden spoon, beat in the sifted flour, adding as much as needed to make the dough, when stirred, pull away from the sides of the pan. You will need most of the amount given. Allow the dough to cool for 5 minutes. If the pan is still very hot, transfer the warm dough to a bowl. Beat in the lightly beaten egg and then knead the dough with your hands first in the pan or bowl, then briefly on a flat surface. If the dough is too sticky to handle, knead in a little more flour until it no longer sticks to your hands.

Divide the dough in two equal portions. And if not using immediately, wrap the dough (still slightly warm) in plastic wrap and leave at room temperature until required. It can be left overnight.

Mix all the ingredients for the filling in a bowl, adding the lemon juice gradually until the mixture is spreadable consistency (it should be thick but spreadable).

When ready to proceed with baking, center an oven rack and preheat the oven to 350F. On a large sheet of parchment paper, with a floured rolling pin, roll one portion of the dough into 13 x 8 ½-inch rectangle. Transfer the rolled dough right on the parchment onto a large rimmed baking sheet (a 13 x 18-inch half sheet pan works well). There should be at least a 1-inch rim left free on the baking sheet to allow for expansion.

Roll out the second piece the same size as the first and set aside for a moment.

Spread the filling evenly over the dough on the baking sheet, leaving a ½-inch rim around the edges. Reverse the other half of the dough quickly on top of the filling, peeling off the paper. Press the edges firmly together. You will cut the edges later, so, don’t worry too much about them being perfectly even. Using a toothpick, poke several tiny holes on the top for steam to escape. Bake the lebkuchen until golden, about 25 to 30 minutes. Transfer the cake, still on the baking sheet, onto a cooling rack.

While the cake is baking, make the icing. Put the icing sugar in a medium bowl. Gradually add the lemon juice whisking until the thin icing of pourable consistency forms. While the cake is still warm, pour the icing over it, using a pastry brush to cover it evenly. Work quickly. Allow the icing to set and the cake to cool at room temperature. The author recommends to leave it until the following day to dry, and then trim the outer edges and cut the cake into squares. But I impatiently decided to trim the edges after about 3 hours of cooling (I was anxious to try these out). I sliced the rest of the cake the next day as per the recommendation and found it was more difficult to cut (the icing shattered more). So, I would suggest to let the cake to cool completely (check the bottom of the pan) and then trim the edges and cut the cake into small squares. Or, if you have a large container for storing, don’t cut the cake until you actually need it. The cake will soften overtime and become a bit easier to slice.

Keep the squares in an air-tight container, between the sheets of parchment paper, for several weeks.