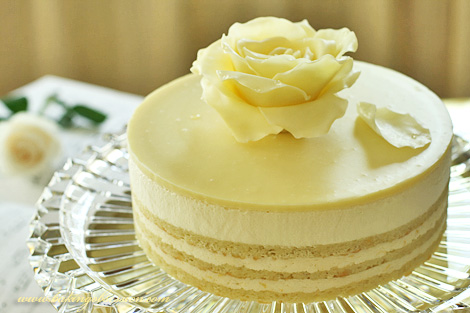 This was my debut in the Daring Bakers Challenge. The baking task was the white chocolate l’Opéra, which in this interpretation was not the French classic, to be exact. The shape of the cake and the flavorings were left up to the challengers. While thinking about the flavor to choose I stumbled upon some breathtakingly beautiful pink grapefruits. That’s when I made my choice. I flavored the soaking syrup, buttercream, and the mousse with the grapefruit zest and Pink Grapefruit Liqueur (made in France, by the way) with, surprisingly, very nice, definite grapefruity flavor. It gave the mousse a pleasant light bitterness and very interesting taste. Since the whole white chocolate idea was already quite a deviation from the original, I had let myself to go even further and used Swiss buttercream instead of French one. I baked the joconde in two half-sheet pans, and then cut out three 8-inch rounds. Then I assembled the cake in a ring, mainly because I wanted to pour the mousse on the top before it sets and then let it set undisturbed. This way the mousse preserves its wonderfully light airy texture. As a decoration I placed a white chocolate rose on the top of the cake.

I really don’t recommend to attempt making this cake in one day. The rush will affect the quality of the end product and you will certainly be exhausted. It took me 3 evenings to put the cake together. Was it difficult? I’d say, no. But my husband will definitely disagree since it was him who had to put our dear son Tim to bed three nights in a row. And this, of course, included the full program: bath, tooth-brushing, night-story reading, etc.

This is my cake preparation plan spread over few days: 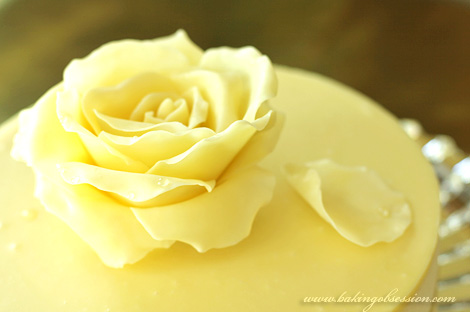 Combine the nuts with half the confectioners’ sugar in the food processor. Process the nuts and sugar, stopping to scrape down the sides of the bowl and break up any caking as needed, until the nuts are finely ground, but not so long that the mixture becomes oily.

Sift through a medium sieve (1.5-2 mm mesh). Return the nuts that didn’t pass through the sieve to the food processor with the remaining confectioners’ sugar and process until the nuts been reduced to a fine powder.

Transfer the nut-and-sugar powder to a bowl, break up any caking with your fingertips, and mix thoroughly.

Covered airtight, the mixture can be stored up to a month at room temperature.

Combine the sugar, water, and the zest in the saucepan and bring to a boil, stirring occasionally to dissolve all the sugar. Cover and allow the syrup to cool.

Covered airtight, the syrup can be stored for up to several months at room temperature.

For the Swiss grapefruit flavored buttercream:

For the white chocolate mousse:

For the white chocolate glaze: 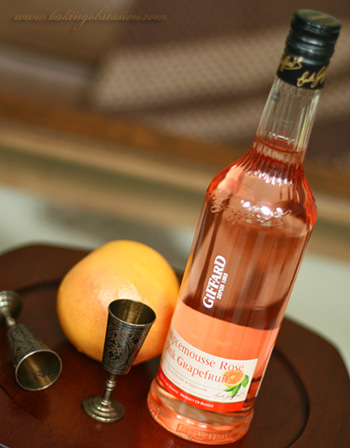 Make the joconde layers in two batches. It involves some extra dishes to wash, but also produces the best joconde ever.

Center an oven rack and preheat the oven to 425F. Line a half-sheet pan with parchment paper: butter the pan first, and then butter the parchment. Put the prepared pan into another pan of the same size. It will prevent the bottom from overbrowning.

Combine the whole eggs with the almond-and-sugar powder in a mixer bowl, and beat at medium speed with the wire whisk, until cream-colored and light, about 3 minutes.

Sift the flour over the beaten eggs. Using a rubber spatula, gently fold in the flour.

Using a clean wire whip and bowl, whip the egg whites in the mixer at medium speed until they start to froth. Add the cream of tartar. Gradually increase the whipping speed to medium-high, and whip until the whites just start to form stiff peaks. Add the superfine sugar gradually, and continue whipping at high speed for a few seconds to incorporate the sugar and tighten the meringue.

Scrape the batter into the prepared baking sheet, spread and smooth the batter with a large spatula to completely cover the baking sheets in an even layer about 1 cm thick.

Bake until the cake is lightly golden browned and firm to the touch but not dry, about 8-10 minutes.

You will have the half of the one joconde layer left over. Wrap it tightly and freeze. Next time you want to bake a similar cake, you will have to bake only one batch of joconde.

Strain the heavy syrup, discard the grapefruit zest. Combine 1/3 cup of the heavy syrup with 2 tbsp of the liqueur (or light rum). Cover, set aside until ready to use.

Bring 1 inch of water to a simmer in a wide skillet. Turn the burner off . In a bowl of a stand mixer, lightly whisk the egg whites and sugar together, then set the bowl in the hot water. Whisk until the egg-white mixture is hot to the touch and an instant read thermometer reads 140F. You might need to return the skillet to the lowest heat to reach the desired temperature of the egg whites. It will take about 8 to 10 minutes.

Meanwhile, cut up the butter into two-tablespoon portions.

Replace the wire whisk onto the paddle. Gradually, 2 tbsp at a time, beat in the softened butter at medium-medium/high speed. Add the next portion of the butter after the previous portion has been incorporated. When all of the butter has been added, slowly increase the mixer’s speed to medium-high and continue beating the buttercream until the mixture begins to look light and fluffy. It might take up to 10 minutes. Stop the mixer and scrape the bowl. Reduce the speed to low. Add the flavorings including the zest, and continue to beat on low speed for a minute. Increase the speed to medium-high and beat again for an additional minute.

The buttercream can be frozen for up to 3 months, in an air-tight container.

Before you decide to proceed with the mousse preparation, you have to fill the cake with the buttercream first. Cut out 3 8-inch rounds from the joconde (two from one sheet, and third – from another joconde layer). Place one cake layer onto a cardboard circle, and then into a cake ring or a springform pan. Brush with 1/3 of the soaking syrup, spread half of the buttercream (about heaped 1 cup); repeat with another cake round, syrup, and buttercream finishing with a last joconde round moistened with the syrup. Cover with plastic wrap and refrigerate for at least one hour and up to one day.

When ready to start, bring 1 inch of water to a simmer in a wide skillet. Turn the burner off (if your stove is electric, remove the skillet from the burner) and wait for 30 seconds. Meanwhile, place the chocolate and liqueur (or rum) in a medium heatproof bowl. Set the bowl of chocolate in the hot water. Stir constantly until the chocolate is melted and smooth. Remove the bowl of chocolate from the hot water. Let the chocolate cool to about 85 – 90F (a small dab on your lip should feel slightly cool, not cold). If the chocolate mixture is too cold, the mousse may turn out grainy; if necessary, set the bowl in the pan of warm water for a few seconds before the next step.

Whip 1 cup of the cream in a medium bowl only until it is thickened and barely beginning to hold a shape – when you tilt the bowl, it should flow to one side, fluffy but still pourable and not at all stiff. Scrape the cream into the bowl of chocolate and fold carefully but quickly just until the two are incorporated. The mousse should seem too soft; it will firm up later. Immediately, while the mousse is still soft, pour it over the cake (still in the ring). Cover loosely with plastic without touching the surface of the mousse, and chill until set, at least a couple of hours, or overnight – even better.

Prepare the glaze; finish the assembling:

Melt the white chocolate with the heavy cream following the instruction for making white chocolate mousse. Stir gently, don’t whisk, until smooth. Let cool until the glaze temperature reaches 85-90 F, for about 6-8 minutes. Pour over the chilled cake. Tilt the cake (still in the ring), holding it securely, to cover the top surface completely with the chocolate glaze. Use a small offset spatula to facilitate the spreading of the ganache if needed, but work quickly. Place the cake into the refrigerator overnight to set the glaze.

Finish and decorate the cake:

To unmold the cake, run a thin knife around the sides of the cake, then remove the ring. Transfer the cake onto a serving platter.

When ready to serve the cake, carefully transfer the rose on the top of the cake (wearing the gloves is a very good idea here). A few tiny drops of the light corn syrup resembling the dew, will complete the picture.

The cake can be made a day in advance and kept in the refrigerator.

The cake holds its shape very well. Nothing oozes even during the slicing. But make sure your knife is hot.